The Knoxville Focus for September 9, 2019

By design on September 8, 2019Comments Off on The Knoxville Focus for September 9, 2019 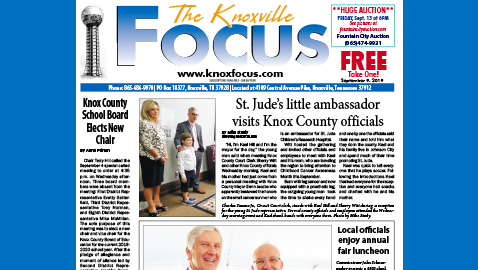 Next, Seventh District Representative Patti Bounds nominated Owen for the position of vice chair. Then Ninth District’s Kristi Kristy nominated Babb for the same position. In a roll-call vote, both candidates received three votes. Representative Babb made a motion that the vote for vice chair be postponed until the September 11, 2019 meeting so that all board members could be present for the vote. The motion was seconded and the motion carried.

At 5:01 p.m. Chair Terry Hill called the Knox County Board of Education Workshop to order. There were seven out of nine Board members present. McMillan had joined the group at this time.

Hill announced that the Knox County Commission will meet jointly with the board of education next Wednesday, September 11, 2019 at 3:30 p.m. in the City-County Building.

Superintendent Bob Thomas followed with his report. Thomas thanked everyone involved with the incident at Powell High School last Tuesday where an air conditioner malfunction was misinterpreted as gunfire and put the school into lockdown. Special kudos went out to Principal Chad Smith and his staff, the Knox County Sheriff’s Office and Knoxville Police.

At this point, Thomas turned the meeting over to Russ Oakes for an update on the Capitol Improvement Plan for Elementary/Middle schools in Knox County. According to Oakes, plans are being made for major improvements (possibly a new school) for Adrian Burnett Elementary School. Hopefully ground will be broken for a new Northwest Middle School by 2021. The Lonsdale project will be undertaken by both Knox County government and Knox County Schools working together.

The workshop continued with discussion of Board Policies. A brief discussion about online fundraising piqued some board members’ interests. Apparently, the policies on fundraising need to be clarified so that teachers are not personally put at risk for liability when raising funds for their school or classroom. Bounds requested that Policy D-280 be re-examined and re-submitted at the September 11, 2019 meeting.

Bounds also advocated support for a resolution supporting an increase in teacher salaries under the Basic Education Program (BEP.) Representative Bounds is hoping the Knox County School Board as a whole will support this resolution when it is sent to Governor Bill Lee.

Hill thanked the board and the public for letting her serve as School Board chair for the past year and wished the new chair and vice chair well.

There was no Public Forum and the meeting adjourned at 6:07 p.m.