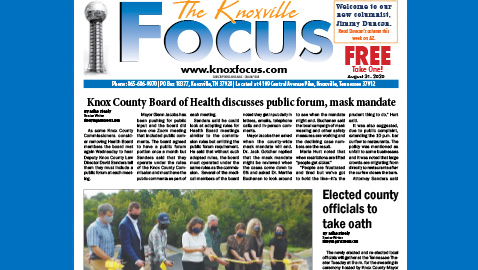 As some Knox County Commissioners consider removing Health Board members the board met again Wednesday to hear Deputy Knox County Law Director David Sanders tell them they must include a public forum at each meeting.

Mayor Glenn Jacobs has been pushing for public input and the board did have one Zoom meeting that included public comments. The board agreed to have a public forum portion once a month but Sanders said that they operate under the rules of the Knox County Commission and must have the public comments as part of each meeting.

Sanders said he could look at adopting rules for Health Board meetings similar to the commission rules but omitting the public forum requirement. He said that without such adopted rules, the board must operated under the same rules as the commission.  Several of the medical members of the board noted they get input daily in letters, emails, telephone calls and in-person comments.

Mayor Jacobs then asked when the county-wide mask mandate will end. Dr. Jack Gotcher replied that the mask mandate might be reviewed when the cases come down to 5% and asked Dr. Martha Buchanan to look around to see when the mandate might end. Buchanan said the local campaign of mask wearing and other safety measures are working and the declining case numbers are the result.

Maria Hurt noted that when restrictions are lifted “people get sicker.”

“People are frustrated and tired but we’ve got to hold the line—it’s the prudent thing to do,” Hurt said.

It was also suggested, due to public complaint, extending the 10 p.m. bar curfew to restaurants. The policy was mentioned as unfair to some businesses and it was noted that large crowds are migrating from directly to restaurants after the curfew closes the bars.

Attorney Sanders said he will look into including restaurants in the curfew. He also advised the Board of Health to begin looking for a physical place to hold public meetings as the governor’s emergency proclamation is due to end. He also said, however, he expects permission to hold Zoomed meetings to be renewed.

The board expressed concerns about UT and Knox County Schools opening and plans to review the COVID-19 local results in two weeks. Buchanan spoke on the subject and said, “We need to wait and see.”

A request was made to the university and the Knox County School System to keep the board informed and possibly send a representative to meetings.