By design on June 14, 2020Comments Off on Knoxville mayor meets with black leaders 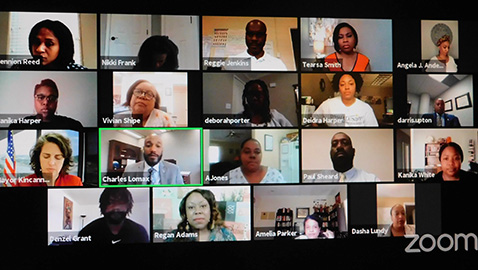 Lomax told the virtual gathering the city is creating “Empower Knoxville,” an offshoot of Save Our Sons and Knoxville plans to be more inclusive and expand efforts to include younger boys and girls.

Reggie Jenkins said another task force isn’t needed but community groups need to collaborate with each other and added, “We’re already here.”

Tanika Harper said trade classes need to be brought back to schools.

David Hayes said Knoxville is historically racist and the police are overfunded.

Mayor Kincannon responded that the city continues to correct problems and she is “more than happy” to use city resources to participate in issues.

Councilwoman Amelia Parker outlined a number of things she’d like to see happen, including expanding jail divergence, a new use of force policy, strengthening PARC, and moving city resources to community efforts.

Vivian Shipe said there should be more input in hiring  of police officers and asked the city to “get past the Blue Code” and to get rid of “rotten apples” and clean house.

Various other panel members expressed their concerns and proposals.

Knoxville mayor meets with black leaders added by design on June 14, 2020
View all posts by design →