By design on June 4, 2017Comments Off on Koepfer leads Concord Christian to new heights 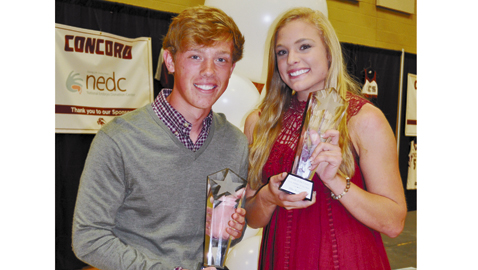 Allie Koepfer excelled in volleyball throughout her high school career at Concord Christian.

She didn’t waste any time either.

As an eighth grader in the fall of 2012 Koepfer helped lead Concord Christian School to the TSSAA Class A state volleyball tournament – the school’s first state tourney berth in any sport.

Her play on the court steadily improved over the years, evident by the awards she received – from All-District 3-A and All-Region 2-A in 2014 to become the district’s and region’s MVP in 2015 and 2016.

In her senior season last fall Koepfer and the Lions captured the district championship, defeated Grace Christian Academy for the region title and won over Berean Christian School in the sectional round.

With a 21-9 record going into state at Murfreesboro, Concord Christian won two matches and lost two as it earned third place honors for the second straight year.

Koepfer, who signed a volleyball scholarship with Lee University in Cleveland, and senior classmate Josh Davis were the female and male winners of this year’s Pride of the Lions Athlete of the Year award at Concord Christian, according to Tom Franklin, the school’s athletic director.

Davis, a dual sport athlete in basketball and soccer, was a real leader on and off the field, pointed out Franklin.

“He was a captain on the high school soccer team with the same amount of goals as assists, which is a tribute to his skill as well as his character – he likes to support just as much as he likes to lead,” said Franklin.

Davis also excelled in academics and has been accepted into UT’s Honors program.

Julia Martin may play at one of the smallest and newest high schools in Tennessee, but the First Baptist Academy junior has scored points on the state level.

Martin was at the recent TSSAA Spring Fling in Murfreesboro and put four points on the scoreboard for FBA, which is located in Powell.

Julia earned the points by placing fifth in the 300-meter hurdles in the Division II state track and field meet. Her time was 49.03 seconds.

Martin also qualified to compete in the Division II state pentathlon and her top performances came in the 800 run and 100 hurdles.

In addition to track and field, Martin also is a starter in basketball and volleyball for the Red and Navy Blue Lady Eagles.

While Julia will be heading into her senior year this coming fall, Harris has three years ahead of him to entertain FBA fans as he plays for Mercer, who also is the Eagles’ head basketball coach.

Noah started in every game as a freshman, averaging nearly a double-double, pointed out Mercer, and scored 40 points in a game versus the Knoxville Ambassadors’ home school team – just one point short of the school record.

“Noah had a phenomenal freshman season and the sky is the limit for his future,” added Mercer.

Opposing teams were careful when pitching to Seymour High’s Brandon Parrott this season. And many times they decided it was best not to pitch to him at all.

Parrott, the Inter-Mountain Athletic Conference’s Offensive Player of the Year with a .346 batting average, was intentionally walked 19 times this spring. The slugger has signed to to play baseball with East Tennessee State University.

Seymour’s Student-Athlete of the Year also was an All-IMAC selection in football as he was the Eagles’ leading tackler with 116 total hits, including 8.5 tackles for loss and 3.5 sacks. On the football field, opposing teams didn’t have the option of avoiding him.

Katelyn Witucki is the school’s female honoree as Student-Athlete of the Year, according to Athletic Director Gary Householder.

Katelyn, who has committed to play golf at Maryville College, was a three-time Class AAA state tournament qualifier, a District 2-AAA and IMAC champion, and a two-time Sevier County champion.