By design on February 7, 2021Comments Off on Lady Bulldogs knock down 14 treys in 80-17 victory over William Blount 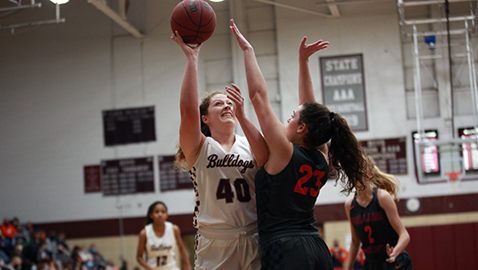 Ruth had perhaps the best offensive game of her career as she scored 19 points and knocked down five 3-pointers. Rice scored seven points, all after halftime, and McLaughlin, a guard, had three points.

“These are three great seniors and they’ve always been leaders,” Bearden coach Justin Underwood. “Reagan had a great game, Natalie knocked down some shots and hit a 3-pointer and Zneyah has done just about everything for us since she’s been here. These girls are leaders and they’re all great young ladies. They’ve led us all season.

“They have siblings who have played here and I think I’ve had a McLaughlin ever since I’ve been here.”

This game was over early as the Lady Bulldogs (18-1 overall, 12-0 in District 4-AAA) came out blazing. Bearden opened a 21-6 lead by the end of the first quarter.

The Lady Bulldogs were particularly hot from the perimeter. Bearden made 14 shots from beyond the 3-point arc. In addition to Ruth’s five long-range jumpers, Maddie Brillhart had three. Jennifer Sullivan and Hannah Claire Stephens had two each. Emily Gonzalez, Avery Treadwell and Rice each had one.

Treadwell, a sophomore post player, was also a force inside as she finished the contest with a game-high 20 points for the Lady Bulldogs, who led 44-9 at halftime.

Lady Bulldogs knock down 14 treys in 80-17 victory over William Blount added by design on February 7, 2021
View all posts by design →