By design on September 20, 2020Comments Off on Lady Bulldogs outlast Farragut 3-1 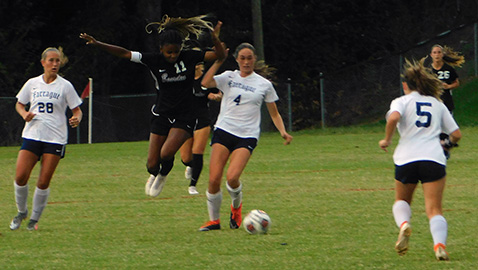 Bearden High School girls soccer coach Ryan Radcliffe felt like he needed to get his team’s attention at halftime Thursday night after a brief downpour came through West Knoxville.

“This was the first time this year that we’ve been able to go into the locker room and I gave the girls a frustrated speech,” Radcliffe said after the Lady Bulldogs outlasted Farragut 3-1 in the annual regular-season meeting between the two Kingston Pike rivals. “I had to pump them up with some halftime music, I guess you could say.”

At halftime, the Lady Bulldogs (8-1) had a 2-1 lead but Radcliffe wasn’t happy with his side’s effort during a hard rain that began midway through the first half.

“I was frustrated because I felt like when it started raining, we shut down and we quit playing,” he said.

The Lady Bulldogs (8-1) took an early lead when sophomore attacking midfielder Becca Roth tallied the match’s first goal, an unassisted marker, in the fourth minute of the contest.

Then the rains came roaring in and a seemingly startled Bearden side went cold and the Lady Admirals, who suffered their first loss of the 2020 season, equalized the game when Annabelle Ekern promptly took a cross from Lexie Foley and banged the ball into the back of the Lady Bulldogs’ net.

The home team regained the lead in the 38th minute on the strength of Roth’s second goal of the game to make it 2-1.

Then, came the halftime speech. And Bearden responded by outshooting Farragut (7-1-2) 10-0 after halftime. The Lady Bulldogs got the final goal of the match when Hali Parker scored in the 65th minute.

“I was proud of the girls for their calmness in the second half,” Radcliffe said. “But I felt like we left a lot out there and I felt like we didn’t finish.”

For Farragut coach Kristen Lyons, it was her first game in the Bearden-Farragut rivalry and she was more than impressed with the effort from both teams.

“I’ll tell you what, this is high school soccer to a tee,” said Lyons, the Lady Admirals’ first-year head coach. “I love the rivalry. I love the banter from the sidelines.

“The girls respectfully played each other. They knew what this meant for each team, and it’s just fun to watch.”

It was the second game in a rivalry week for Farragut, which salvaged a 2-2 draw against Hardin Valley Academy Tuesday night. The Lady Admirals erased a 2-0 deficit against the Lady Hawks.

“We’ve been surprising and upsetting some people,” Lyons said. “We do not go away without fighting, and yet again, we had another good battle (against the Lady Bulldogs.)

“They didn’t disappoint me with their effort (Thursday). I think, technically, we were on the weaker side, but we have so much fight in us. The girls were up for this game because it’s such a great rivalry. It was very enjoyable. “