The Last Years of Nancy Kefauver

By design on November 5, 2017Comments Off on The Last Years of Nancy Kefauver 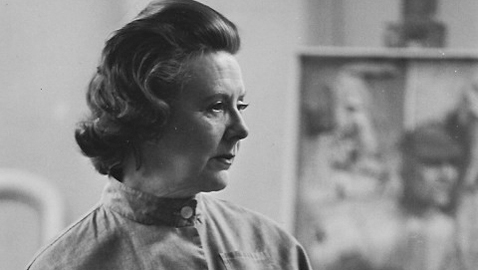 By Ray Hill
Senator Estes Kefauver died on August 10, 1963 when his aorta burst.  Kefauver had died at Bethesda Naval Hospital and according to his biographer, Charles Fontenay, the senator had put off urgent surgery to await the arrival of his wife, who was vacationing with two of their daughters in Colorado.  Nancy Kefauver  rushed back to  Washington, D. C., but Kefauver was dead before she reached the hospital.  Mrs. Kefauver’s plane was pulling up to the ramp as Estes Kefauver expelled his last breath.

Washington, D. C., the center of power in the United States of America, can be a cruel place for the widows of those men who once wielded power in the nation’s Capitol.  Those spouses who had basked in the reflected glory of a famous man were all too often quickly forgotten.  Not so Nancy Kefauver.

In the weeks following her husband’s death, Nancy Kefauver was deluged with more than 20,000 telegrams and letters of condolence.  Mrs. Kefauver quickly secured the help of the senator’s personal secretary to answer each and every communication.

Unlike the wives of many prominent Washington men, the vivacious redheaded Nancy Kefauver had no fortune to fall back on following her husband’s death.  Nor was there any cushy retirement awaiting the late senator’s widow.  Senator Kefauver’s estate was reputedly valued at more than $300,000, but once debts were paid, the widow was expected to receive less than $50,000.  With young children still at home, it was readily apparent the fifty-two year old Nancy Kefauver needed a job.

Born in Glasgow, Scotland, Nancy Kefauver had come to Tennessee as the wife of Estes Kefauver and then they were off to Washington, D. C. when he had been elected to Congress in a 1939 special election to fill the vacancy after the incumbent had died.  Nancy Pigott had first met Estes Kefauver when she had visited her aunt, Mrs. John L. Hutcheson, in 1934.  Once married, the Kefauvers kept a home on Lookout Mountain, but mostly they lived in Washington, D. C. for a decade before Estes defeated Senator Tom Stewart to win a place in the United States Senate.  By all accounts, a woman of genuine charm, the one thing Nancy Kefauver did have was friends.  One proof of Nancy Kefauver’s appeal was the fact Tennessee’s crusty senior senator, Kenneth D. McKellar, who loathed Estes Kefauver, highly admired his junior colleague’s bride.

Nancy had remained by her husband’s side not only through the difficult race for the Senate, but tumultuous bids for the Democratic presidential nomination in 1952 and 1956.  Perhaps foolishly, Estes Kefauver had entered the primaries before President Harry S. Truman had declared his own intentions in 1952.  Kefauver had won the New Hampshire primary, which did nothing to endear him to Truman.  The President had shortly thereafter announced he would not seek reelection, but never fond of the Tennessee senator, Truman became an active enemy.  Nancy loyally campaigned by her husband’s side, which took an effort as there were rumors the marriage had entered a difficult period.  Senator Kefauver was a heavy drinker and had an open fondness for the ladies, which almost surely put a strain on his marriage.  Muckraking columnist Drew Pearson, a good friend of Kefauver’s, recorded in his secret diary that the campaign seemed to bring Nancy and Estes closer together perhaps more so than ever before.  Certainly, Nancy Kefauver proved to be a huge asset to her husband.

As Democrats prepared to gather in Chicago for their national convention in 1952, Nancy Kefauver’s portrait was featured on the cover of LIFE magazine.  Beside her photo in the edition labeled “A Convention Goer’s Guide to Chicago” was the caption: “Political Charmer Nancy Kefauver.”

After Senator Kefauver’s death, Nancy Kefauver’s charm and abilities served her well.  The senator’s widow was a talented artist and had operated an art school with a good friend for several years.  With her husband gone, the income was not enough to sustain her, much less allow her to help put a couple of her children through college.  Mrs. Kefauver had graduated from the Glasgow School of Art and had studied in London, Paris, and Washington.

A couple of years before her death, Nancy Kefauver gave an interview to Wauhillau LaHay, a writer for Scripps-Howard who was writing a series on Washington widows.  Mrs. Kefauver confessed she had not had “the remotest idea of leaving Washington” and going home to Tennessee after her husband died.  “Estes transplanted me from Scotland to Chattanooga when we were married,” Nancy Kefauver explained.  “Our four children were born here and right here in Washington is where my jobs are.”

The decision to remain in Washington, D. C. was evidently an easy one for Nancy Kefauver.  “I’ve been in Washington longer than I’ve been anywhere in my life,” she told a reporter.  The idea of replacing her late husband in the Senate was an idea she had rejected.  “My first responsibility is to my children.  I am not trained or qualified for public office.”

Mrs. Kefauver kept her interest in the art school, which had grown from six students to more than 100 over the years.  Nancy Kefauver’s other job was with the State Department, where she served as the Adviser on Fine Arts.  Reputedly, Nancy Kefauver’s appointment was the last made by President John F. Kennedy in November of 1963 before his assassination.  Originally, the appointment was part-time employment, but within weeks it soon became a full-time position.

“The average wife isn’t equipped to carry on,” Nancy Kefauver candidly told an interviewer.  “I was simply a housewife and an artist.  I decided I had to work.”

Nancy Kefauver helped American embassies around the world acquire art, for which there was no budget.  Mrs. Kefauver frequently had to beg or literally borrow art to cover the walls to give visitors to embassies some concept of American art.  Nancy Kefauver collected “oils, water colors, ceramics, graphics, mobiles, constructions, wood carvings, sculpture”, all of which were stored at the Smithsonian Institute, where she spent one day every week.

While working at the State Department, Nancy Kefauver still supervised classes on Wednesday nights and Saturdays at the art school.  Nancy Kefauver kept herself quite busy, traveling across the country and the globe.  Mrs. Kefauver was in Santa Fe, New Mexico to visit with Dr. Delmar Kolb, the director of the Museum of New Mexico, where she discussed the two-year loan program of the State Department and said, “We like to think of this program, as backing up our diplomacy with our cultural image.  We Americans have been so busy abroad engineering, we’ve not given the average people of these countries any real knowledge of American culture.”

Nancy Kefauver had first noticed the “drab” interiors of American embassies while traveling with her husband.  “As a practicing artist it just killed me to see all that marvelous wall space going to waste,” Mrs. Kefauver complained.

“I knew President and Mrs. Kennedy very well and we used to talk about the lack of representation of our culture abroad,” Nancy Kefauver recalled.  “After my husband died I found myself with four children in college or about to enter.  I had taught painting at my studio for years, but I needed a full time job.”

Once installed at the State Department, Mrs. Kefauver was told the embassies in Dublin and Mexico City had been completed and “we want American art on the walls of those buildings in two months.”

To understand the scope of Nancy Kefauver’s task, there were 222 buildings requiring art works and Mrs. Kefauver estimated perhaps 15 – 20 pieces of artwork for each building.  More than that, Nancy Kefauver had to consider “the floor plans and color schemes of the buildings, the preferences of the occupants” as well as “the physical and cultural climate of the country.”

Mrs. Kefauver’s travels had taken her through South America, New Delhi, Mexico City, London, Rome, Paris, Athens, and Africa.  Occasionally, Nancy Kefauver was asked about the possibility of remarrying.  Mrs. Kefauver usually sidestepped the question or deflected it by retorting, “I had too perfect a marriage.”

Nancy Kefauver, along with her children, did return to Tennessee in June of 1966 when the library at the University of Tennessee was dedicated in her late husband’s honor.

When Nancy Kefauver traveled to Tampa, Florida, a local reporter marveled that the “seemingly indestructible” cultural diplomat had visited four Southern cities in less than a week.  At a press conference, Mrs. Kefauver politely, but firmly “reaffirmed she will never enter politics” and laughed when asked about the fact she and her assistant had visited “16 countries in two years.”  Mrs. Kefauver admitted, “Yes, we try to travel light.  I tell people we take ‘one black tie’ and sometimes I wish that were all.”

Nancy Kefauver’s last years were likely as pleasant as they were busy.  Very few people have the opportunity to work at something they love, while maintaining a whirl of social activities.  Nancy Kefauver was in the enviable position of doing a job she found rewarding and interesting, while not being consigned to the outer reaches of Washington society.  Mrs. Kefauver regularly attended any number of functions associated with the State Department, as well as cocktail parties and dinners thrown for Washington’s elite.

Unfortunately, Nancy Kefauver proved not to be indestructible after all.  She was attending a dinner in the Mayflower Hotel’s grand ballroom honoring Senator Everett Dirksen of Illinois on November 20, 1967.  The golden-throated Dirksen was the father-in-law of Tennessee’s junior U. S. senator, Howard Baker, who held the seat that was once occupied by Estes Kefauver.  Five hundred guests had gathered to honor Senator Dirksen and President Lyndon Johnson was expected to make an appearance.  Malcolm Fooshee, a New York attorney and cousin to the late Senator Kefauver who later recalled she “didn’t seem to be herself”, had escorted Mrs. Kefauver to the dinner.  Apparently, Nancy Kefauver was ill and suddenly fell face forward on the banquet table.  Fooshee and several friends carried Mrs. Kefauver to a room on the seventh floor of the Mayflower Hotel.   An ambulance and doctors had been called, but it was too late;  despite the attempts of two doctors, efforts to resuscitate Nancy Kefauver failed.  Only fifty-six years old at the time of her death, her sudden passing stunned friends in Washington, D.C. and Tennessee.  The woman Estes Kefauver had once gloated was his “secret weapon” was gone.  The Kefauver children, Lynda, 26, David, 21, Diane, 19, and 17-year-old Gail were left without either parent.

Senator Albert Gore, Estes Kefauver’s Senate colleague for a decade, remembered Nancy Kefauver as “an elegant lady.”  Herbert S. “Hub” Walters, who had been appointed to the United States Senate by Governor Frank Clement when Estes Kefauver died, said, “I thought a great deal of Nancy Kefauver.”  Walters noted she had always been “willing to do her share in the work” of building Tennessee’s Democratic Party.  Former governor Gordon Browning, a friend and ally of Senator Estes Kefauver, remembered, “Nancy Kefauver was a great lady and a wonderful help to her husband during his career.”  Perhaps Congressman Joe L. Evins put it best when he said, “The grace and charm and sparkle of Nancy Kefauver will always be remembered as one of the bright chapters of American public life.”

“Sparkle,” for those who knew her, was precisely the right word to describe Nancy Kefauver’s personality.  Senator Kefauver was quite right in describing his wife as his political secret weapon for Nancy charmed her way across the country and eventually, around the globe.

The Last Years of Nancy Kefauver added by design on November 5, 2017
View all posts by design →