By design on February 4, 2018Comments Off on Like Lady Vols, South-Doyle gets better playing guys 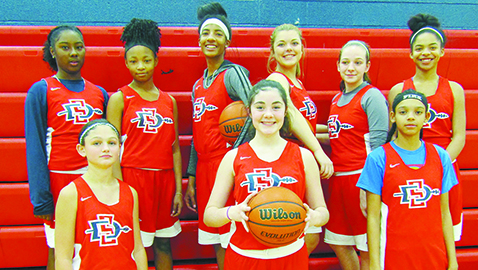 South-Doyle’s girls wrapped up the Knox County middle school regular season basketball championship last week and they could give the school’s boys’ team an assist for that accomplishment.

Eric Brabson, who coaches both the girls’ and boys’ teams, sometimes has had his girls practice against his boys this season … somewhat like the Tennessee Lady Vols have traditionally gone up against “male practice players.”

It has helped the South-Doyle girls’ quickness, strength and confidence.

“We definitely have the boys play defense against the girls,” said Brabson prior to a practice session last Wednesday. “Some of the girls get a little bit stronger from it. They get to the point like ‘we can compete against boys,’ and then they feel kind of comfortable competing against any group of girls.

“For some of them, it helps with their quickness, especially if they have to defend boys.”

Early in the season, the focus was working on basic skills.

“But since we’ve come back from Christmas, we’ve definitely done a lot more with boys versus girls,” said Brabson, who has seen positive results in games.

For example, he has noticed starting point guard Jamia Simmons’ ball control benefitting from it, “because the guys are more apt to snatch the ball from her in practice. Now she’s a little bit stronger with her ball control in games.”

Brabson said his two teams also have competitions, “like shooting games, with the boys against the girls to see who shoots better. They definitely like to compete against each other.”

This past Saturday, South-Doyle turned its full attention to its female counterparts in the annual Knox County Middle School tournament. The top-seeded Lady Cherokees were scheduled to play Powell Saturday morning to tip off a full day of quarterfinal action.

The tourney is slated to resume Tuesday with girls’ and boys’ semifinal games starting at 4:30 at Karns Middle School.

If you’re a sports fan but have never been to the annual county tournament, I would recommend checking it out, particularly one of the final two nights.

You won’t have to have a son or daughter playing in it to enjoy the action and pure sports drama you’ll witness from the 13 and 14-year-old athletes.

It definitely should be on your “local” sports bucket list to check off.

Like Lady Vols, South-Doyle gets better playing guys added by design on February 4, 2018
View all posts by design →