By design on July 7, 2019Comments Off on Maryville nips Karns 11-9 in District 6 Little League finals 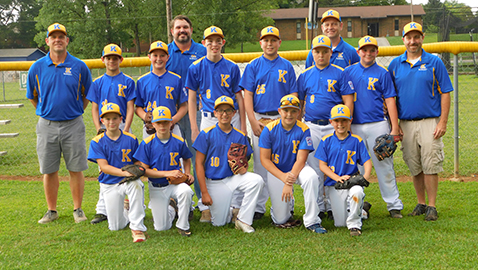 Like it does about every summer, it came down to Karns versus Maryville.

The boys from Blount County came out on top this year, rallying for an 11-9 win over host Karns in a close and exciting District 6 Little League championship game Friday night.

“It was a good game,” said Karns Head Coach Bobby Currier. “They probably just made more plays than we did.”

The victory was the second for Maryville over Karns in the tournament. The team in Red had edged the guys in Blue and Gold 6-5 in eight innings in their first matchup at Athens in the South Division finale of the district.

The top two teams in the South and North Divisions came to Karns to determine the District 6 champion and representative in this season’s State Little League tournament, which will get underway July 20 at Bristol.

The Tennessee state champion will advance to the Southeast Regional with dreams of winning there and advancing to Williamsport, Pa., to play in the televised Little League World Series.

Trailing 9-8, Maryville rallied for three runs in the top of the sixth inning and then held Karns scoreless in the bottom of the last inning to claim the championship banner.

Noah Hardin led off the Maryville sixth with a double to left field and later raced home for the tying run when a pitch went past the catcher to the backstop.

After giving up a base on balls, Karns’ Neels Schoonbee, who relieved starter Matthew Champion in the fourth, got the next two batters out, but Cole Hendrickson lined a double into the right field gap to score Tyler Davis and break the tie. Jake Farmer followed with a single to shallow right field to bring in an insurance run.

Karns tried to come back in the bottom of the sixth. With one out, Joe Currier reached up and poked an infield hit between first and second. However, Maryville right fielder Seth Breeding made a great catch of Joey Wilson’s hit down the right field line and fired to first base to double off Currier and end the game.

Karns took a 3-2 lead in the first inning before the game was delayed for an hour because of lightning in the area. When play resumed, Maryville went ahead 5-3 in the top of the second, but Karns came in and put five runs on the scoreboard to grab an 8-5 lead. Conner Madden had a two-run triple and Schoonbee a two-run single in that explosion.

Maryville tied it with three runs in the fourth, but Karns scored one run in the fifth to retake the lead. Champion and Ben Styles led off with back-to-back singles up the middle and Champion scored on an overthrow to first when Maryville tried to convert a doubleplay.

Karson Hard got the mound win in relief.

“He did well,” said Coach Currier. “We just didn’t get timely hits. They got it done in the top of the sixth and we didn’t.”

But overall, Currier was proud of his team and its effort in the tournament.

“They were fantastic,” he said. “They played about as hard as any team I’ve ever coached.

“We came up short, but it was a good experience.

“I’ll take this team and play with them anywhere.”