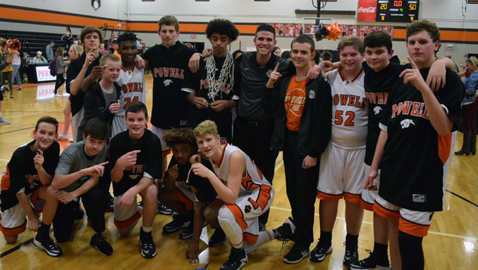 It was an in-school game at Karns.

“We lost by two points,” recalled Davidson. “It was a packed house, standing room only. For middle school kids, that was a really neat experience and environment. You could be four feet from each other and screaming and couldn’t hear each other … a real intense environment at the beginning of the season to call plays. I just said ‘Go play, do your best and have fun.’

“After that, we got in the gym and worked hard at it.”

Since then, it’s been full speed ahead for the Lady Admirals, who won their next 12 league games in a row to capture the Knox County regular season championship.

As it turns out, Farragut’s first game in the upcoming post-season league tournament will be back at Karns in the quarterfinals Saturday.

“It’s a new season for everybody now,” said Davidson, who also is head volleyball coach at Farragut High. “The league’s over. Everybody is 0-0.

“As I told the girls, ‘We’ve got to come out and play tougher. Take care of the little details. Play together as a team.’”

Four of Davidson’s five “key leaders” this season have been seventh graders. Barnes is the lone eighth grader in that group. The seventh graders are Strickland, Priest, Ella McFerran and Ashlynn Sheridan.

“Those five have been core on helping coach the younger players up,” pointed out Coach Davidson.

“Macy has been with me for three years. She’ll go on and make a great impact in high school.”

Another key player for Farragut has been Alexis Kochenderfer, an eighth grader. Hayley Prince, a key seventh grader, has been sidelined with a wrist injury since the holidays.

Farragut, 16-4 overall, bothered Bearden with its full-court press and built a 16-0 lead before the Lady Bruins got on the scoreboard. The Lady Admirals also utilized an effective 1-2-2 zone in the half court. It was 20-7 at halftime and 25-14 after three stops.

Davidson currently is in her seventh season coaching FMS girls basketball and her 2014-15 team also won a league crown. She also was at FMS earlier in her coaching career when her 2004-05 and 2006-07 squads captured the league title.

Meanwhile, Powell (12-1, 21-1) rolled past Whittle Springs 50-20 Thursday to wrap up the boys’ crown, the fifth for Darin Courtney in his 15 seasons as the Panthers’ head coach.

“A regular season championship in our league is precious,” said Courtney. “It’s earned over a four-month period in a league that has a lot of outstanding coaches and talent.

“We often hear it said that basketball is a tournament sport and it is. We’re going to give it our best shot. This team has a chemistry that’s special.”

South-Doyle defeated Vine Thursday to get the No. 2 seed in the boys bracket.

Carter earned the No. 2 seed in the girls bracket.

The top two seeds receive byes in the first round.

Boys’ first-round games Friday, starting at 4:30, will pit Cedar Bluff at Vine, Halls at Bearden, Whittle Springs at Farragut, Holston at Karns, Gresham at Carter and Northwest at West Valley.

The remainder of the tournament will be played at Karns, with quarterfinal games starting Saturday morning at 10. Semifinal games will be Tuesday (Feb. 7), with the consolation and championship games on Thursday (Feb. 9).