By design on January 20, 2019Comments Off on Mobility, safety discussed at Hardin Valley forum 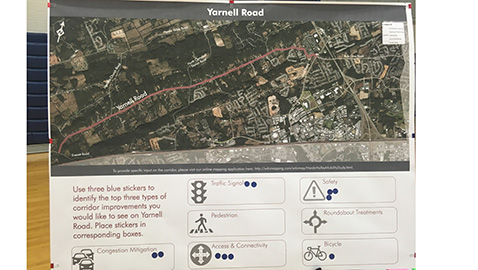 An open house-style public forum was held on Tuesday, January 15 at Hardin Valley Academy regarding proposed changes to Hardin Valley mobility, for both motorists and non-motorists.

The meeting was held to gauge public opinion on matters that are important to the occupants of Hardin Valley and the abutting areas.

The roads and areas that are being studied and will be revisited with a plan of action are: Hardin Valley Road all the way to Hickory Creek Road; Everett Road at Yarnell; Yarnell Road at Campbell Station; Lovell Road at Hardin Valley and Pellissippi Pkwy; Solway Road.

After a recent survey was conducted, receiving feedback from 795 respondents, it was determined that the top five comments regarding the issues surrounding these roads and areas are congestion during school drop-off/pick-up and rush hour, that the roads are too narrow, that there is poor lighting and visibility, general congestion and the lack of shoulders.

Two examples of comments were,“Yarnell is too narrow and needs to be widened for growth to happen,” and at the hard bend in the road just as Hardin Valley Rd becomes Hickory Creek Rd it was said that “removing the bend in the road will lead to excessive speeding unless a roundabout or three way stop is put in place.”

Upon entering the gymnasium at Hardin Valley Academy, attendees were shepherded around the perimeter of the gym where there were large poster board displays set up on easels.

Some of the displays had information such as the survey results and some had satellite images of the aforementioned areas.

Attendees were given small round stickers and were encouraged to place the stickers on the poster boards in specific, outlined areas that were of concern to them.

In a presentation, there were nine examples of potential improvements mentioned.

Hardin Valley’s tremendous growth was also stated in the study, citing that between 2014 and 2018, 1,300 new building permits were issued.

90 percent of them were single family residential and the other 10 percent were commercial and multi-family developments.

There was also a vague timeline offered moving forward with this project.

There will be another public and stakeholder meeting in February along with a prioritized project recommendation list that will be complete by late February to early Spring.

By late Spring, the conductors of this study want to have a finalized document.

The overall goal for this study and potential restructuring is to create “an efficient and effective motorized and non-motorized transportation network in Hardin Valley.

For more information about the project, including detailed satellite images, visit www.knoxplanning.org/plans/small-area/hardinvalley.