By design on September 16, 2018Comments Off on MPC approves concept and development plans for Post Oak Bend over residents’ objections 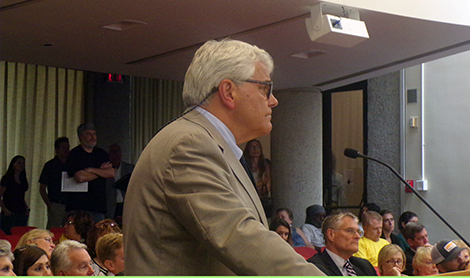 For the second straight month yellow shirted members of Northshore Corridor, which represents several home owners associations, packed the main assembly room at the City County Building to protest the proposed Post Oak Bend subdivision.  Last month the Metropolitan Planning Commission (MPC) postponed the issue. However, at the Thursday, Sept. 13 meeting, after considerable discussion, the MPC approved the concept and development plans for the 260-acre subdivision.

This is only the first step in a process the developers say will – take ten years to complete. Plans for the proposed subdivision, which is to be located on the northeast side of Tooles Bend Road, northeast of  I-140 and south of South Northshore Drive, call for up to 198 detached residential units, 184 attached residential units, 240 condominium units, a clubhouse, parks and other amenities, plus a sewage treatment plant.

Staff noted that the water and sewer systems must be in place before final plat approval. Also the condominiums will require separate approval because they would be along a scenic highway. Numerous road improvements on Tooles Bend Road and South Northshore Drive including turn lanes, a traffic signal and guard rails must also be installed before final plat approval is granted.

There was discussion of the accuracy of the traffic counts used. Hollis Loveday, speaking in favor of the subdivision, drew laughter from the audience when he stated that the completed project would cause an increase of 15 to 20 cars on Northshore Side. When questioned about this by Commissioner Art Clancy Loveday said that this lower figure was traffic per minute while a higher number used in other traffic counts referred to the number of cars in one hour.

“You have the authority to approve a lower level plan,” asserted Tom Hale, representing Northshore Corridor. He went on to say his client is not opposed to the property being developed. He said they were opposed to the difficulties being discussed that day, including building 266 dwelling units at the end of a winding, shoulder-less road.   He said the addition of the sewer plant would generate additional traffic. “You don’t have to leave your common sense at the door,” he told commissioners.

There was a lengthy technical discussion of the figures used in a traffic study which seemed to lose the audience.

Turning to other items the MPC approved the concept and development plans for The Highlands at Clear Springs, a proposed 160 lot subdivision on the north and south sides of Glen Creek Road, south of Middleton Pike

The MPC gave final approval to dividing the Sharp property on the northeast side of Tazewell Pike and north of Fountainhead Lane into two lots.

To conform with actual use of the land the MPC agreed to change the sector plan designation from Low Density Residential to General Commercial and recommended a zoning change from Agriculture to General Business on 6.82 acres owned by Ken Gilbreath on the south side of Strawberry Plains Pike and east of East Governor John Sevier Highway.

In spite of area residents’ claims that the character of the neighborhood of the single family residences would be changed the MPC approved the development plan of Helen Ross McNabb that called for up to 50 apartment units on the southeast side of Mineral Springs Avenue, east of Whittle Springs Road.

The MPC approved the development plan of Crescent Bend Development for 249 apartment units on 25.8 acres on the southeast side of Westland Drive, east of Ebenezer Road.  This approval came despite the objections of Kevin Stevens who represented the local homeowner’ association. Stevens stated the apartment complex would harm property values and quality of life. He also asserted the commercial look of the proposed buildings was out of character with the neighborhood.

MPC approves concept and development plans for Post Oak Bend over residents’ objections added by design on September 16, 2018
View all posts by design →