My love for sports … it just came naturally

By design on June 19, 2016Comments Off on My love for sports … it just came naturally 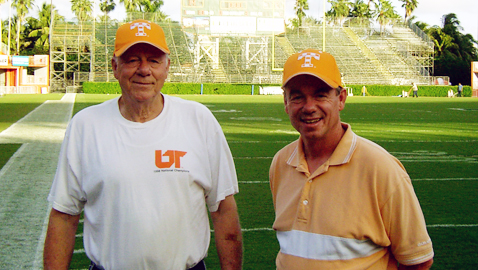 EDITOR’S NOTE: This was Steve Williams’ Father’s Day column that ran in The Knoxville Focus in 2008. Steve’s father, Mr. Bob Williams, passed away March 5 of this year. Steve wanted to rerun this column and plans to write a follow-up column on his dad for our June 27 issue.

I was really never a pitcher, but I can still remember dad kneeling down in a catcher’s position and letting me practice throwing pitches to him. He even had a catcher’s mitt, so that made the experience feel even more neat as I tried to throw strikes.

When Father’s Day comes around each year, I always reflect on sporting times shared with my dad over the years. I’m sure there are many of you who do the same.

I guess you might say I inherited my love for sports from Bob Williams of Clinton. It just came naturally.

I was the oldest of four boys Bob and Bobbie raised, and we played many games inside and outside of our home at 202 White Street in Clinton. I’m sure we made a lot of noise, but they never complained. They encouraged and supported us as we tried to make our mark in sports.

In my hometown, the Optimist Club of Clinton, provided youngsters with the opportunity to play organized sports, and my dad has been an active member for over 40 years.

I still remember the excitement I felt waking up on Saturday mornings and playing in the Optimist Club’s youth basketball league.

As for football, the Optimist Club started out with a “touch” league and started its “tackle” league program just in time for me to play on its first midget league team. My dad was one of the coaches.

Dad also was an umpire and coach in our town’s Little League baseball program and also served some time as its president. He still doesn’t like the concept of today’s “travel teams,” which put the best players in town on one team and weakened the league considerably overall. In fact, many Little League programs no longer exist as they once did, not only in Clinton but in Knoxville as well. A lot of boys with marginal talent or lack of financial means have been left behind.

Dad grew up in Appalachia and Big Stone Gap, small towns in southwest Virginia. He played football, basketball and baseball in high school at Big Stone Gap. His high school consolidated with East Stone Gap back in the 1960s and became Powell Valley High. Over the years, my brothers and I have made many trips with dad to see Powell Valley play and I saw firsthand that there are a lot of University of Tennessee fans in that area, which is located only about an hour away from Kingsport.

That must explain why my dad’s blood runs orange. He has been a UT fan for as long as I can remember and has gone to many classic Vol football games over the years. He was in Memphis when Dewey Warren and Tennessee beat UCLA. He and mom were on hand when the Vols rallied to beat Notre Dame in the Miracle at South Bend and they thoroughly loved that victory over Miami in the Sugar Bowl.

We’ve made many football trips in dad’s Big Orange van and still enjoy tailgating before home games. I treasure the picture of my dad and I standing together at the Orange Bowl in 2003, the day before the Vols beat Miami.

I’ll never forget being with dad at Neyland Stadium when the Vols pulled out that win over Arkansas to remain undefeated and keep their national title hopes alive in 1998.

Dad’s den at home is decorated with a lot of UT memorabilia. There’s even an “thank you” card from the late Ray Mears still hanging on the wall, although the message, written in orange ink, has faded. The card was to thank dad for a “salesmanship” picture he had given the UT basketball coach back in the 1970s.

Dad has been an unofficial football recruiter for UT. He told Phillip Fulmer about the Jones brothers in Big Stone Gap and still regrets the Vols didn’t land Thomas and Juluis, who are now running backs in the NFL.

I’ve always thought dad would have made a great athletic director. If he was, be sure there would be no black on the Vol uniforms and the Lady Vols would not wear nearly as much blue, if any at all. He would have encouraged John Ward to stay on longer as Voice of the Vols and at least continue to broadcast the football games. He wouldn’t have allowed longtime Vol fans to lose their seats for stadium renovations or the building of sky boxes, either.

Speaking of  sky boxes, there’s one in Clinton my dad built. His property is right behind the Clinton High football field and on Friday nights, if you look down behind the north end zone, you can see dad and others watching the Dragons play.

On football Saturdays, you’ll find us at Neyland Stadium, section N, rooting for the Vols. Dad, who just turned 80 last month, will be standing and rooting the Vols on. Please don’t tell him to sit down.

If there’s one thing I’ve learned from dad about being a Vol fan, it’s this: “Shakers don’t make noise.”

My love for sports … it just came naturally added by design on June 19, 2016
View all posts by design →