By design on December 8, 2019Comments Off on New lease on life for Knoxville High 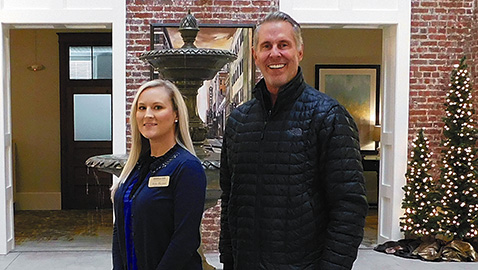 What developer Rick Dover has done with old Knoxville High School is amazing. If you ever visited the old building before Dover bought and converted it to apartments you’d be absolutely pleased.

Dover, who is known for repurposing old buildings, started in Lenoir City and Loudon by buying and renovating a former hospital, an old school, and the historic Carmichael Inn.

While he’s built new structures, like Northshore Senior Living, his real talent and love is returning old buildings to use with modern amenities. His approach in creating Oakwood Senior Living out of a former school and his conversion of the old Farragut Hotel into Hyatt Place has received praise. And he loves to include the history of the buildings into the renovation.

“We didn’t know that the Farragut was the home of the creation of the SEC. There’s a plaque there now about that,” he told The Focus.

Knoxville High Apartment Living has its history on display with  student and sports photos, memorabilia, and even a letter sweater in its on-site museum.

While Knoxville High is mostly an independent living facility for those over 55 years, it also has apartments for people younger than 55 and just outside has an Airbnb with two apartments. Next door is another apartment building that Dover developed in a former fire station aptly called Fire Hall Apartments.

Dover chose RAM Partners to operate Knoxville High and Amber Burchett, the executive director, took The Focus on a tour of the three story brick facility last week. Because Dover chose to use the former classrooms and offices as living spaces, each studio, one bedroom or two bedroom apartment is unique in design and size.

Burchett said one of the two former Knoxville High School graduates there now lives in what was then the principal’s office.

The once open space in the middle of the school  has been enclosed in glass and is now a common area with a fountain.

All utilities except cable television and telephones are covered in a lease. That includes everything from gourmet meals by an executive chef, housekeeping, social events, laundry and linen service, fully equipped kitchens in each apartment, car and van services, and so much more. Given all the amenities Dover compared living at Knoxville High to being on a cruise.

Plus, the location at the corner of 5th Avenue and Central Street is just a block away from Old City and within a trolley ride to downtown Knoxville.

If you’d like a tour of Knox High Apartments you can go online to www.knoxhigh.com or call (865) 338-4207. You’ll be surprised and delighted at what you find there.

What’s next for Rick Dover?

“I’m looking at a building in Macon, Ga.,” he said when asked about future plans.

In Knoxville, the rehab of Old South High School is underway and soon Dover will have his hands full as he starts renovation on the former State Supreme Court Building downtown.

He says he’d like to “ease it down” a bit in new projects but added what he does is so interesting that he can’t help being invested in it.

New lease on life for Knoxville High added by design on December 8, 2019
View all posts by design →