By design on March 15, 2020Comments Off on New QB Club wants to help sustain culture started by Rosser 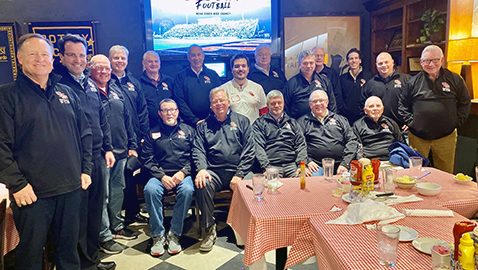 A new Central High Quarterback Club was formed last season as the Bobcats were moving toward their second straight Class 5A state championship under Bryson Rosser and Mike Hensley was asked to serve as its first president.

“At the first meeting, I reminded the 40-plus attendees that Coach Rosser will be gone one day,” recalled Hensley recently. “Well, a month later, his wife Brook gets offered a job of a lifetime and they made the best family decision to move to Boston.”

With former defensive coordinator Nick Craney now the Bobcats’ new head coach, the objective of the CHS Quarterback Club is much like Craney’s, and that is to sustain the culture started by Rosser six years ago.

“Hopefully, we had learned from the last six years and developed a plan to help our next coach,” said Hensley. “Coach Craney and Athletic Director J.D. Lambert had been with Coach Rosser the whole six years and have the trust of the students and a plan to continue growing the CHS family with the same focus on the students and the community. Coach Carney has a heart for God and the experience to represent our children and our community.”

Hensley also proudly pointed out the Fountain City community has a long history of supporting Central High through its sports programs and specifically the football team.

“The Quarterback Club is a good opportunity for folks in the community who want to support and help fund the needs of the football program,” said Lambert. “They can contact me and I can give them the details of how to become a member.”

Hensley said he and others became aware early in Coach Rosser’s tenure that he was taking a new approach to motivating the current generation of young men. “He challenged them to be not just men, but to be God loving men with an awareness of how to serve others.

“We all are starting to see these young men serving the community at the elementary schools, nursing homes, the local Lion’s Club and much more.”

Hensley also got the opportunity to join the team on the sidelines and in the locker rooms.

“The lessons being taught were unlike any I had ever witnessed. There was plenty of discussion about football, but there was as much focus on the growth of that young man standing in front of this coaching staff. The wins started stacking up as the culture of serving took hold. And we have now won back to back state championships.”

There are currently 40 members in the Quarterback Club.

“The requirements are pretty simple – a $500 annual commitment, two meetings a year to help determine the needs of the program and a desire to support the team, and more importantly, the student-athletes,” said Hensley.

The contribution can be made to CHS Quarterback Club and sent to: Wes Thomas, 601 Lampwick Lane, Knoxville, Tn 37912.  The donation goes to a charitable organization.