By design on October 29, 2017Comments Off on Oak Ridge’s Defense Stifles Fulton 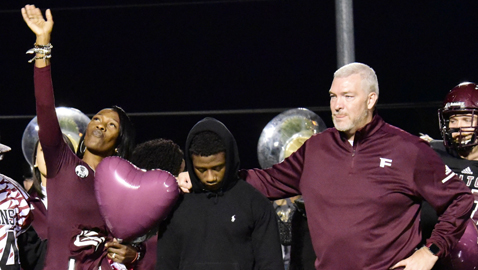 The old adage, “defense wins championships,” proved true Friday night in a Region 3-5A game at Fulton that decided the regular season regional championship between the Fulton Falcons and the Oak Ridge Wildcats. Both teams struggled offensively, but the Wildcats made key plays on defense and got just enough offense to prevail 21-12.

With the win, Oak Ridge earned a number one seed and will face Soddy-Daisy at home in the first round of the Class 5A Playoffs. Fulton will be the number two seed and hosts Lenoir City at home.

Oak Ridge scored the go-ahead touchdown in the first half with 38 seconds left on a 41-yard touchdown pass from Johnny Stewart to Caleb Martin to put the Wildcats up 7-6.

Before Martin’s touchdown catch, the Falcon defense had been limiting the Wildcats. On a 3rd-and-10, J’Coryan Anderson stepped in front of Stewart’s pass and ran the interception back 43 yards for a touchdown with 2:46 left in the first quarter. Fulton would miss the extra point but led 6-0.

Fulton got a second interception by Jashaun Fenderson, who outlept the Wildcats’ Jordan Graham. However, Fenderson gave the ball right back to the Wildcats when he fumbled on a reverse.

The Wildcats’ defense rose to the occasion the whole night. The Wildcats limited Fulton to 143 total yards and just 13 rushing yards on 19 attempts. The Falcons’ quarterback Xavier Malone was just 13 for 25 for 130 yards.

“What you have to do against them is not give them the big play, cheap score,” Oak Ridge Head Coach Joe Gaddis said. “You have to be able to run the football and control the clock. Those two things we did very well.”

In the third quarter, Oak Ridge stopped Fulton on a 3-and-out. Taking up 8:09 of the clock, the Wildcats drove the ball to the Falcons’ 5-yard line. Oak Ridge got a delay of game penalty on 4th-and-1 to force the Wildcats to kick a field goal; Oak Ridge missed the 26-yard field goal.

However, Fulton could not take advantage of the missed field goal and gave the ball right back to Oak Ridge. Herbert Booker intercepted Malone’s pass, his second interception he threw. On the next play, Caelan Thompson ran for a 3-yard touchdown. The score put the Wildcats up 14-6 with 1:18 left in the third quarter.

“The ones (turnovers) we got from them were big turning points in the game and momentum stoppers,” Gaddis said. “I thought the defense did a heck of a job creating the turnovers,” he added.

Oak Ridge responded to Fulton’s touchdown. Martin made the play of the game on a one-handed 36-yard catch to give the Wildcats a first down at the Falcons’ 14-yard line. One play later, Stewart ran for a 14-yard touchdown with 4:30 left to seal the game and put Oak Ridge up 21-12. From there, the Wildcats stopped Fulton’s last offensive possession and ran out the clock.

“We came into this game a heavily underdog,” Stewart said. “It just feels good to come out here and prove everybody wrong,” Stewart said. “Our defense kept us in the game. It was a good team win,” he added. “I’ve coached in Oak Ridge 16 years,” Gaddis said. “I’ve never had a game where everybody, news media, Knoxville, even a lot of people in Oak Ridge, knew we were going to lose this game. I never thought we would. Our players didn’t. But, it was pretty much a consensus, whether it was the news media on TV or whoever else. I’m proud of our guys for winning the game that I knew if we played well, we would.”

Before the game, Fulton honored former player Zaevion Dobson on Senior Night by retiring his #24 jersey number. Dobson would have been a senior this year, but was killed when he shielded three girls from gunfire nearly two years ago. Zenobia Dobson, his mother, and brothers Zacklyn and Markastin joined on field for the ceremony before the game. Balloons were released in Dobson’s honor.

“We’ve known this for a long time that we were going to do this and we wanted to do it on his (Zaevion’s) senior night,” Fulton Head Coach Rob Black said. It was Black’s idea to surprise Zenobia. “I can’t imagine anybody else being more deserving,” he added of the decision to honor Zaevion.