By design on October 15, 2017Comments Off on Operation Honor Guard raises funds 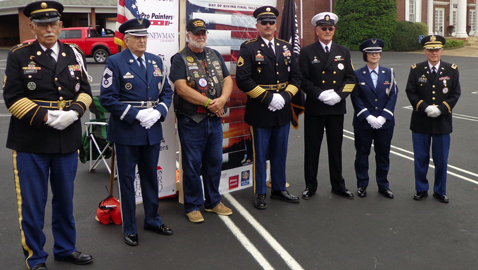 You probably saw them at Rose’s Mortuary on Broadway and Kingston Pike last Wednesday. Both locations had members of the East Tennessee Veterans Honor Guard present and people were pulling into the parking lots to visit and donate on the Day of Giving.

At the Broadway location WATE TV personalities were present to help out and cover the event.

The Veterans Honor Guard are volunteers who take their free time to attend various events for veterans and  perform military service at veteran’s funerals. They are not paid and it can be very expensive to keep up uniforms and rifles for a 21 gun salute, not to mention the expense of traveling to the site of a funeral or memorial service.

It can cost as much as $800 to outfit a volunteer and the Honor Guard was hoping to raise about $25,000 last week. At the end of the day they found they had actually raised more than $40,000.

Capt. Reid Gerhardt is president of the group, which also helps the various veterans groups in the region.  If you are interested in donating or finding out more about the Honor Guard, you can email etnvhg@gmail.com or call 865-223-3825. The mailing address is East Tenn. Veterans Honor Guard, P.O. box 22802, Knoxville, TN. 37933.

Members of the East Tennessee Volunteer Honor Guard are made up of people who served in all five of the military services. They are: