By design on August 21, 2016Comments Off on Plans for grant to curb elder abuse announced 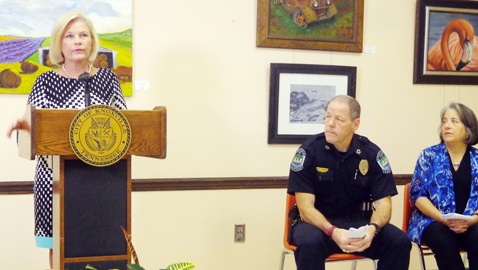 When District Attorney General Charme Allen took office in September of 2014 she said the office had no one designed to deal with elder abuse and she recognized that the growing number of cases involving senior citizens needed some special attention.

“It was evident immediately that we needed a specialized prosecutor and a unit that would deal with these types of problems,” Allen said, adding, “The sad thing is that in just two years we have outgrown the one prosecutor.”

She said two people are now working on elder abuse andher office may use part of their share of grant money to hire a third prosecutor.

Allen, speaking at a press conference last week, joined Mayor Madeline Rogero, Police Chief David Rausch and U. S. Attorney Nancy Harr in kicking off a new crime prevention program to raise awareness of the abuse of senior citizens. The District Attorney General’s office will share in a special grant from the federal Justice Department’s Office of Violence Against Women. Knoxville is only one of nine communities to receive the $400,000 grant.

More than 483 investigations were conducted last year involving abuse of senior citizens in Knox County with 422 of those inside Knoxville. The cases involved charges of emotional abuse, financial exploitation, neglect, and physical and sexual abuse. Most of those, 311, were allegations of neglect, followed by financial exploitation.  The investigations, according to Allen, may be a small percentage of actual abuse cases because most go unreported.

“When I checked the cases this year we were already over 500 cases just for the half-a-year,” she said. “I’m sure we’ll be well over 1,000 cases by the end of the year,” she added.

“What is great about this grant is that my prosecutors, along with law enforcement from the city and county, and local health care providers, will all be going together to be trained as a cohesive unit,” she said, elaborating that they will then come back and train other law enforcement officers to deal with and identify elder abuse.

Allen said the state codes on elder abuse “have not been updated for quite some time” and the majority of elder abuse laws were written in the late 1970s. She said that her prosecutor is working with the Tennessee District Attorney General’s Conference to update the laws and will pushing those changes after the first of next year.

Harr, the U. S. Attorney for the Eastern District, called the effort a “wonderful example of partnership” between the federal and local governments.

Mayor Rogero said that elderly abuse can also include the family, caregivers and even online scams.

“The problem is real and it is vital that all of us who serve the public know how to recognize the signs of abuse and know what resources are available. That’s why our police department applied for a grant from the U. S. Department of Justice,” Rogero said. The mayor said the grant is being administered by the Knoxville-Knox County Community Action Commission’s Office on Aging.

Chief Rausch said the older population in Knoxville has increased by 24% between 2008 and 2012 and that number continues to grow daily.

“Domestic violence victims over the age of 50 account for 45% over the past five years,” the chief said.

“The program we’re kicking off today will lay the groundwork to fight this epidemic,” he said, adding, “All Knoxville Police and all Sheriff’s Department Deputies will receive specialized training.” He also said that the program will be working with all the Knoxville and Knox County Senior Centers.

Plans for grant to curb elder abuse announced added by design on August 21, 2016
View all posts by design →