By design on May 22, 2016Comments Off on Powell High field first to get new turf 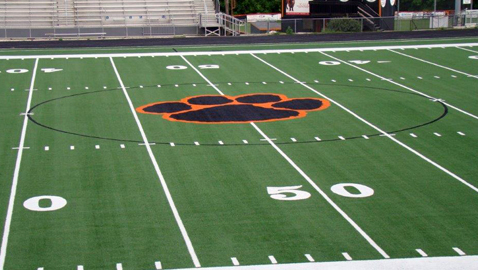 That’s where the Powell Panthers play and their new artificial turf is ready for use.

Powell is the first of 13 Knox County high schools getting artificial turf over a three-year period, thanks to a $10 million gift from the Haslam family, Pilot and Pilot Flying J.

The project started March 15 at Powell and was completed May 11.

“I love it,” said Powell head football coach Rodney Ellison via e-mail on May 13. “This is a field for the entire community to be proud of. Everyone seems extremely excited about the field.

“Our players went out and took a group photo that I tweeted out the day they finished and played some touch football on it as well.”

Other sports besides football also will play on the new turf.

“The soccer teams will play half of their home games on the field,” said Ellison.

Recent studies have shown an artificial turf is safer to play football on than natural grass.

Ellison noted some other advantages, too.

“We will save money by not having to buy gas or have mowing equipment repaired,” he said. “We will no longer have to buy paint for the field and we will not have to spend all the extra hours doing field maintenance.”

Work is well underway at Bearden and Farragut.

With installation reportedly having been running ahead of schedule, it recently was announced Central has been added to the list of schools to get artificial turf in time for the 2016 football season. Work at Central is scheduled to begin June 1 and be completed by Aug. 1.

Schools now scheduled to get artificial turf in 2017 are Karns, Halls, Gibbs and Carter. Schools on the list for 2018 are West, Austin-East, Hardin Valley Academy and South-Doyle.

Powell High field first to get new turf added by design on May 22, 2016
View all posts by design →