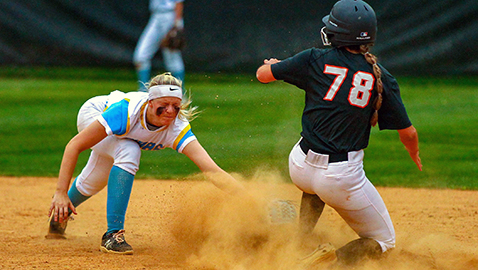 PHOTO BY JAMES SPEARS. Dust flies as Macy Belyea of Powell slides to try and avoid a tag in Lady Panthers’ 2-1 win over Gibbs.

Alaina Watson, playing first base for Powell, was involved in two smacks in the softball game at Gibbs last week.

She much preferred the contact she made in the second one.

After surviving a nasty collision with third baseman Reagan Radocesky as the two went after a pop up midway between the pitching circle and home plate in the fifth inning, Watson smacked a double over third base to lead off the Panthers in the top of the seventh in a 1-1 game.

Radocesky’s sacrifice bunt moved Watson to third and Macy Belyea’s double to centerfield brought her home with the go-ahead run in a 2-1 Powell victory.

“Nobody got hurt thankfully,” said Watson of the collision after the game. “We just need to work on communication. We were both going for the ball. The effort was there. We just need to talk a little bit more about that type of play.

“I could see her out of the corner of my eye a little bit, but I couldn’t tell how close she was,” added Alaina. “But I could tell she was nearby with my peripheral vision.”

Winning pitcher Delayna Bryant had a close-up view of her teammates’ crash.

“I’m just glad they are okay. When they were both calling ‘ball’ at the same time, I backed up trying to avoid any collision. It didn’t work very well, but I tried.”

Watson, batting in the No. 4 spot in the order, said she was just looking for a base hit in the seventh and was expecting a pitch over the inner part of the plate.

“I wasn’t trying to hit it over the fence. I just wanted to get on base.”

She made contact on the first pitch and said it was made “definitely with the sweet spot of the bat.”

Gibbs took a 1-0 lead in the first inning. Freshman Dakota Large singled, stole second and scored on an error.

Powell tied the score in the third. Bryant doubled to right field and Kendall Radocesky’s sacrifice bunt moved her to third.

Gibbs second baseman Emma Keck made a good catch of a hard hit liner for the second out, but a pickoff attempt at third by catcher Madison Watts got away and Bryant scored to tie the game.

Watson, a senior, said it was a really big win.

“We’ve been rivals since 2017 when we faced each other at the state. None of us were there at that time, but we know the rivalry has been passed on. We have to fight and play our hardest and so it’s still a big win. It’s awesome. I’m glad we won.”

After Gibbs defeated Powell in the Class AAA state finals in 2017, Gibbs was reclassified Class AA.

“Thankfully, we went back to state in 2018 and ended up winning the state title,” said Watson, who was a freshman on that team.

Gibbs Coach Carol Mitchell said her team just didn’t get hits or advance runners when they needed to in the game.

“And some of that is not having a last year to feed off of (due to the pandemic). We’re feeding off of two years ago … We’ve got to get back into where we understand the expectation is to win the ball game first and foremost.”

“I don’t care what grade they are in. You walk out on the field; you better expect to win the ball game. Period.

“Maybe we can turn one of these our way in the next few days.”

Gibbs was scheduled to play at Powell Friday.