By design on March 26, 2017Comments Off on After rags-to-riches season, Lewis’ Lady Hornets eye future 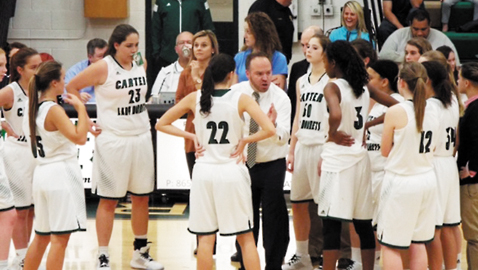 Head coach Bo Lewis, in his second season since taking over a program that had 14 losing seasons in a row, guided a young Carter team on a rags-to-riches adventure.

A win at Alcoa was Carter’s first region tournament victory in 16 years and its first appearance in the region since 2010-11.

Their 22 wins this season were the most the Lady Hornets had recorded since 2001 and gave them their first winning season since 2002.

They produced their first back-to-back seasons of double-digit wins since the early 2000s, following a 12-13 record in Coach Lewis’ first season (2015-16).

Carter also finished third in District 3-AA in the regular season and tournament and that’s its best showing since the early 2000s.

“It’s a joy as a coach just to see the progress each day, win or lose, because this group has worked really hard each day and bought in to what we’re trying to do,” said Lewis, former head coach at Jefferson County High. “We’ve got a long way to go I still feel like, but it’s heading in the right direction.”

The clock finally struck midnight on the Carter girls in the Region 2-AA semifinals, but not before they gave highly regarded Gatlinburg-Pittman a good scare.

The Lady Hornets were up by seven points going into the fourth period but couldn’t hold the lead. Down 50-48, Carter still had a chance with 18.3 seconds remaining but missed a shot from underneath its basket. G-P tacked on a layup before the buzzer to make the final score 52-48.

“We battled,” said Coach Lewis. “The region semifinal game is probably the toughest game in the tournament, just to get over that hump the sub-state game. I was proud of my girls. We had a chance there at the end and that’s all you can ask.

“You’ve got to learn from it and hopefully get another opportunity next year.”

Carter will have everybody back next season except lone senior Che’ Davis, who scored over 1,600 points in her high school career and has signed a scholarship with King University.

Trumm led the Lady Hornets with 439 points. Davis took more of a “support role” with the young team but still ranked second in scoring with 431 points. Heifner totaled 251 points and Depetro 214.

Trumm is an outstanding 3-point shooter. She led the state in made 3-pointers with 111, said Lewis. He added that Bailey’s shooting percentage behind the arc (44 percent) was actually better than her 2-point field goal percentage (41 percent).

The thrill of the win over Alcoa in the region should help propel the Lady Hornets through the off-season.

“They were extremely excited,” Lewis recalled. “We had talked to them a little bit about the importance of that game and what it could mean for our program, as far as keeping our program going in the right direction. I was really happy for our girls to see the excitement on their faces once we got that win.”

The Lady Hornets had come on strong at the end of the regular season, and although they didn’t notch an upset win, they took Gatlinburg-Pittman and Fulton into overtime before losing. Both G-P and Fulton were state ranked teams that advanced to this year’s state tourney.

Following their season-ending loss to the Lady Highlanders in the region tournament, the Carter girls received a standing ovation from the Carter fans as they walked off the court.

“I just love the Carter community,” said Lewis. “They’ve really rallied behind our girls this season. I saw a lot of faces in the crowd. We’re appreciative of that. It’s a Carter family and I truly believe that.”

Being a senior, Davis was disappointed in not getting the win over G-P and advancing in the tournament, but she complimented Coach Lewis for getting the Carter program turned around.

Davis said the key factors in her last two seasons were “giving 110 percent and playing with intensity.

“Coach Lewis led us to this game, working with us after practice and showing he actually cared. He was a really good coach.”

Expect the Lady Hornets to give their fans even more to cheer about next season.