By design on September 2, 2019Comments Off on Reorganization, Ancient Village at commission meeting

Knox County Chairman Hugh Nystrom reads a resolution honoring Trees Knoxville for an award from the Southern Group of State Foresters. Looking on are Tom Welborn and members of the organization. (Photo by Mike Steely) 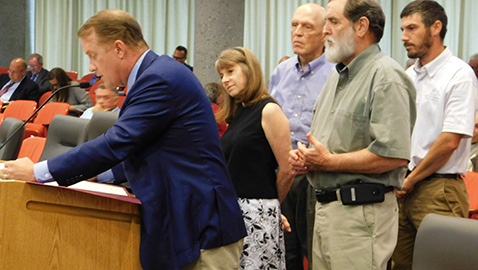 The annual reorganization of the Knox County Commission came into question at last week’s work session as three members said they may not be at the planned September 3 meeting. Commissioner Michele Carringer, who said recently her family has a planned trip and she would be out that date, urged her fellow members to choose another date.

The reorganization is important because the commission will choose a new chairperson and make committee assignments. Commissioner Evelyn Gill may be out because of a family death and Commissioner Charles Busler may be in South Carolina with his family. Busler said he noted the date on his calendar and would drive back to Knoxville for the meeting if necessary.

“Circumstances happen,” Carringer, who serves as vice chair, told the other members. She said the reorganization can happen any time in September prior to their regular meeting that month and she  asked them to set another day.

“Have some respect for our colleagues,” she said.

Commissioner John Schoonmaker noted that the September 3 date was set 13 months ago and called for the meeting to be held on the first business day that month.

A postponement and new date was requested but it would take eight votes to suspend the rules to do so.

“The rules are a little concrete, the charter says sometime before our meeting in September,” Commissioner Randy Smith said.

“It is not about respect it is about precedent. We all have conflicts,” said Commissioner Larsen Jay speaking against changing the date.

“It seems like a rush and that’s a little disturbing,” Carringer replied, adding that the reorganization meeting is “one of the most important things we do.”

The vote was 6-4 to suspend the rule and set another date—not the eight votes required to do so. Commissioners Jay, Schoonmaker, Richie Beeler and Carson Dailey voted “No.”

In the vote to continue the set date of September 3, only Carringer voted “No.”

Opposition continues against Tom Boyd’s Ancient Lore development on Chapman Highway as Corinne Rovetti spoke in public forum.  A member of Knox County Planning Alliance Rovetti said she was speaking as a citizen and charged the development is violating several county codes. She asked the development be postpone or tabled.

She said construction is underway there without approval and cited loopholes in the law that permitted a commercial development in a single family zone.

“It seems a little strange that the state has approved it but the county has not,” Rovetti said.

She said the earthwork is proceeding without any oversight and is violating the ridgetop and hillside recommendations. She also charged that workers are trespassing on private property and asked the commission to do something to stop the development.

Ancient Lore is a development in Boyd Hollow and plans for the 40-acre site call for 40 Hobbit-type dwellings, a 150-seat restaurant, a 500-person meeting center and a 1,000-seat outdoor amphitheater.

Matthew Cross, Ancient Lore’s chief executive, said the project has received state approval as a commercial development but, thus far, is legally a residential project in the county.

“We will build the village somewhere,” he said adding the project is “trying to navigate these different processes.”

The Ancient Lore development was not discussed by the commission.

In other action the commission chose Chris Sharp to serve on the Knox County Air Pollution Control Board. He was selected over two other candidates, Lynn Ludington and Cory Johnson.

The commission gave final approval for the issuance of $37,230,000 in General Obligation Bonds. Also approved, on first reading, was a break for volunteer firefighters that eliminates county fees for the volunteers’ vehicle tags. The commission plans to come back and also give the same break to volunteer rescue squad members.

Trees Knoxville was honored for its award from the Southern Group of State Foresters.

The Schaad Road Extension Project’s Phase 4 was deferred for 30 days as the cost of the project is still being negotiated with Vaughn & Milton Consulting Engineers.

The commission approved a contract with WestRock Converting LLC for recycling services with a note that glass is no longer being accepted because no bidders were found. Glass can be put into the regular trash and will apparently be accepted for the landfill.

Commissioner Charles Busler questioned the adoption of a new county logo and Rob Link, Mayor Glenn Jacobs’ communication director, said the mayor had requested a new design. He said the project is being done internally and will be used on publications as needed.

Reorganization, Ancient Village at commission meeting added by design on September 2, 2019
View all posts by design →