By design on September 2, 2019Comments Off on Road to Fame’s first class to be recognized Friday at Halls game

Super Panther! It's a bird, It's a plane, It's Bailor Hughes, Powell High's senior running back as he gets a little airborne against Anderson County In an exciting game Friday night at Powell. The Panthers scored 28 unanswered points in the fourth quarter to roar from behind for a 48-36 victory over the Mavericks. Coach Matt Lowe's 2-0 Powell team will play at Fulton this Friday night in a Region 3-5A game. Photo by Tracy Heard. 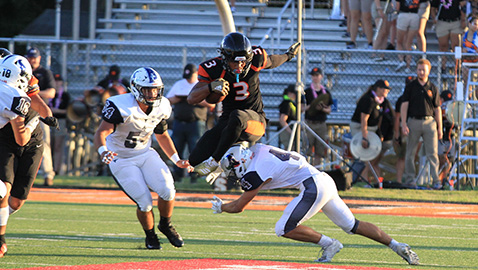 It’ll be a special evening at Halls High School this Friday.

The inaugural class of the Halls High Athletics’ Road to Fame will be recognized at halftime of the Red Devils’ football game versus Clinton.

McMillan will be honored posthumously.

The honorees and their families, along with special guests, will meet at 5:30 in the lobby of the Halls gymnasium, where they will watch and hear a presentation of the athletic accomplishments of the Road to Fame’s first class on a new electronic video board that was recently installed.

Afterwards, the honorees will be escorted to the football field and a 20 by 20 foot tent area, where they will enjoy pregame refreshments and watch the game. Halls Head Football Coach Scott Cummings also will speak to the inductees at 6 o’clock, said Jerry Julian, Road to Fame president.

“We’ve had a tremendous amount of excitement and interest in the first class, and we plan to start accepting nominations for the 2020 class on Oct. 1 and through Dec. 15,” said Julian.

Nominees remain in consideration for selection to the Road to Fame for five years. Persons are not eligible to be nominated until five years after graduation.

In addition to Halls High athletes, coaches and other persons associated with the school’s athletics program may be nominated in the “other” category, said Julian.

There will be six new inductees selected for the 2020 class and four per year thereafter.

Julian also emphasized that nomination forms must be filled out completely.

A LOOK AHEAD: Top attractions on the Week 3 high school football schedule include Sevier County at Central, Gibbs at South-Doyle and Powell at Fulton. Please see Prep Football “focus” for the schedules and scores of all local teams on Page C4.

WES’ HOMECOMING: Wes Jones, the only head football coach Hardin Valley ever had until he resigned this past spring to take an assistant position at Science Hill in Johnson City, will be on the “other” side when the Hilltoppers visit HVA for a Region 1-6A game Friday night.

CONGRATULATIONS: Former Webb School football standout Andrew Craig, who has been a “walk-on” player at Tennessee, was put on scholarship at UT last week. Craig said he grew up a Vols fan and it was like a dream come true.     David Meske, Craig’s head coach at Webb, said: “Andrew was an outstanding player at Webb. It does not surprise me that he earned a scholarship at UT because of his work ethic. We are all so proud of him.”

LONG NIGHT: Dan Hammonds, Greeneville head football coach, was asked what time his team arrived back at its high school after the lightning-delayed game Aug. 22 at Powell.

“About 2:15 in the morning,” replied Hammonds. “Latest of my coaching career for sure.”

The Rivalry Thursday TV game started close to 9 p.m. and ended about five minutes before midnight.

Road to Fame’s first class to be recognized Friday at Halls game added by design on September 2, 2019
View all posts by design →