Rodgers noses out Sackie for Knox County Player of the Year

By design on January 2, 2017Comments Off on Rodgers noses out Sackie for Knox County Player of the Year 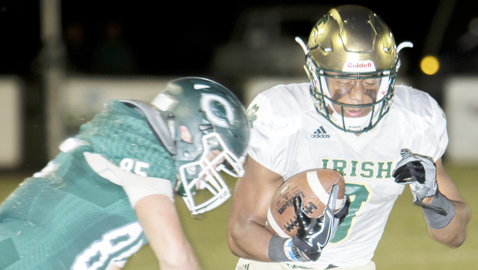 Catholic High’s Amari Rodgers, who became a repeat winner of the Tennessee Titans’ Mr. Football Class 4A Back Award in late November, nosed out Jadarius Sackie of Central for The Knoxville Focus – Coaches’ 2016 Knox County Player of the Year title.

Rodgers, a wide receiver and defensive back who has been committed to sign with Clemson University since last February 14, received five votes from Knox County head coaches, while the 5-6, 220-pound Sackie, a running back and linebacker who led the Bobcats to the Class 4A state finals, was the choice of four coaches.

Head coaches of the 19 high schools that play football in Knox County, including both Division I and II and all classifications, were requested by the Focus to vote for Player of the Year and Coach of the Year in Knox County, excluding their own players and themselves. The coaches also were asked to submit players from their teams for All-Knox County “first team” and “honorable mention.” Seventeen coaches participated, while one declined and one did not reply.

The 5-9½ , 221-pound Rodgers is expected to play wide receiver in college and that’s where he stood out most during his prep career.

“He is an outstanding man both on and off the field,” said Catholic head coach Steve Matthews after hearing about Rodgers’ latest accolade. “We are very proud of him.”

Farragut running back Cooper Hardin and quarterback Adam Fulton, who were a solid 1-2 punch in the Admirals’ voyage to their first-ever state football championship in Class 5A, each received two votes for Player of the Year.

Kuerschen was runner-up to Rodgers for this year’s Class 4A Mr. Football state award.

According to 247Sports, Rodgers is a 4-star prospect. His 40 time is 4.49. He’s a great leaper and plays much taller than his height.

Amari had been committed to Southern Cal, where his dad, Tee Martin, is offensive coordinator. Martin also was the quarterback on UT’s national championship team in 1998. But Rodgers decommitted from USC on Dec. 9, 2015, two days after receiving an offer from Clemson.

Rodgers received an offer from Tennessee on July 17, 2015. He also has received offers from Florida State, Alabama, California and Texas A&M.

Rodgers helped lead Catholic to the state championship as a junior in 2015. The Irishmen were the state’s top rated team, including all classifications, much of the 2016 season, but were upset by Fulton in the second round of the playoffs.

Sackie was a big-play performer on both sides of the ball during Central’s remarkable run to their first state title appearance since 1999.

Rodgers noses out Sackie for Knox County Player of the Year added by design on January 2, 2017
View all posts by design →