By design on February 5, 2017Comments Off on Rogero announces grant to improve North Broadway traffic flow 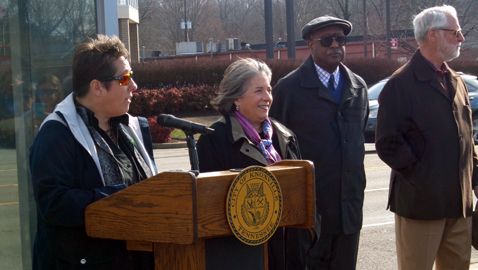 Anyone who travels North Broadway knows that the busy corridor is often a frustrating driving experience. Car, truck, bus and commercial vehicle traffic all seem to bottleneck in Fountain City. That’s exactly where the city decided to hold a press conference Wednesday to announce federal and state funds being allotted to improvements.

Knoxville Mayor Madeline Rogero, her staff, and many of city council members rode the bus from downtown to the press conference, held in the parking lot of Virginia College. They had to stand across Broadway for several minutes before crossing. The little group of officials made it across just as the light changed and traffic resumed to whiz by

“We have the money and the plans,” Rogero told about 20 media and public members over the roar of the traffic just behind her. She announced a new federal grant of $6.4 million to improve traffic flow and transit experience on North Broadway between downtown and Fountain City.

She said the new grant will be managed by the city and the state TDOT department as the Accelerated Bus Corridor project.

Rogero said that the grant will also permit new bus shelters, smart traffic lights, bus pull offs and track city buses so riders will know when the bus will arrive at their stop.

Jeff Branham, the City’s Chief Traffic Engineer, told the gathering that the transit upgrades will help not only bus riders but citizens driving the route as well.

He said that North Broadway already exceeds the route’s capacity by 130% and noted that the grant comes because of the city’s current investment in transit improvements. Rogero said that the city’s $2 million already committed to improvements combines with the grant to put more than $8 million into the project.

Improvements along the Broadway corridor should be completed by early 2018 and Mayor Rogero said that she hopes it is finished by the time she leaves office.