By design on January 12, 2020Comments Off on Rosser era at Central ends with pride and life lessons 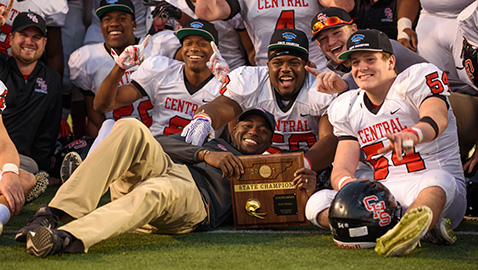 When Bryson Rosser was announced as Central High School’s new head football coach on Feb. 3, 2014, he said what intrigued him the most about the position was “the ability to put my stamp on this program.”

It turned out to be a first class stamp and its value was priceless.

However, 31 days after guiding the Bobcats to their second straight Class 5A state championship, Rosser resigned last week for family reasons.

It was sad news for the team, the school and the Fountain City community, which had seen Rosser take the Central program to new heights and recharge its “Pride and Tradition.”

But CHS wasn’t just losing its head football coach. Rosser also was an Administrative Assistant and an Academic Coach. The latter role he said was to “encourage kids to do the best they can in school and provide them with resources that they need to be successful and graduate.

Rosser broke the news in a team meeting Tuesday afternoon. It was emotional.

“As he said through the tears when he told the team – ‘If you have listened, if you have learned the lessons that I have been trying to teach you – then you are ready for the next step.’

“(He was) teaching up until his last moment with the team.”

Rosser said his wife, Brook, had “a once in a lifetime opportunity and a dream job. She’s going to be working in Boston and will be a part of the Harvard Business School Admissions Board.

“It wasn’t something that was necessarily planned, but from a professional standpoint, we both are always making the best advancements that we can make for each other and this is a great opportunity not just for her, but for our family. So we’re excited about it.”

Rosser also felt it was important to show his football players and all students he was being “a supportive husband.”

Rosser was 30 years old when offered the Central post. At that time, the Bobcats had made the playoffs only once in the six previous seasons.

“Coach Rosser proved to be exactly what Central football needed at the time of his hire,” said Fulton Coach Rob Black. “He did a tremendous job not only building that football program back to winning ways but also rallied the Fountain City community.

“I think one thing that really sticks out to me is the fact that he was as much of a positive mentor to young people as he was a football coach. Knoxville high school football is losing a quality coach.”

Rosser took his lumps in his first season, going 5-6 overall, including a 71-7 loss to Fulton and a 46-0 loss to West in a first-round playoff game.

The 2017 campaign saw Rosser lose starting quarterback Dakota Fawver, then a sophomore, to a season-ending knee injury in a Week 2 loss to Fulton. At least three other Central quarterbacks would go down with injuries that season, which saw the Bobcats (8-6) rally in the playoffs before losing to eventual state champion Catholic 42-7 in the semifinals.

Central started 0-2 in 2018 but won 13 straight to capture its first state championship in the playoff era with a 14-9 win over Henry County in the Class 5A title game that went right down to the wire.

Central extended its win streak to 21 in 2019 before losing its last two regular season games on the road at South-Doyle and Gibbs. The Bobcats, however, avenged those two losses in the playoffs, shut out West 10-0 in the semifinals and rolled past Summitt 30-7 to repeat as state champions.

“I’m excited about where the program is and where they’re headed,” said Rosser.

Associate head coach Nick Craney has been named interim head coach as the search for a new coach is underway.

“I’ll be back hopefully to be with these guys when we celebrate our state championship with the ring ceremony,” said Rosser, who plans to help with the transition over the next couple of weeks. “I’ll see these seniors through at graduation Lord willing and I’ll definitely be watching the Bobcats from afar.

“I mean they gave me my first chance as a head football coach on the high school level. I would have never thought six years would have gone by so fast and has been as successful as it has been. But I’m really appreciative of the Fountain City community, the parents and the players they have entrusted me with the last six years.”

As for his future, Rosser said he will be exploring options. “Hopefully, I’ll be able to help someone out on the football field somewhere next season.”

But for now, “My No. 1 job is getting my family moved up; make sure my wife and my dog (Luke) are situated and happy.”

Said veteran South-Doyle Coach Clark Duncan, whose Cherokees lost to Central 20-16 in this past season’s state quarterfinal round: “I have enjoyed competing against Coach Rosser over the past six seasons. Coach Rosser is one of the good guys in the business. Coach is going to be successful wherever he goes.”

Rosser era at Central ends with pride and life lessons added by design on January 12, 2020
View all posts by design →