By design on November 1, 2020Comments Off on Scalise makes Knoxville campaign stop for Burchett, Trump 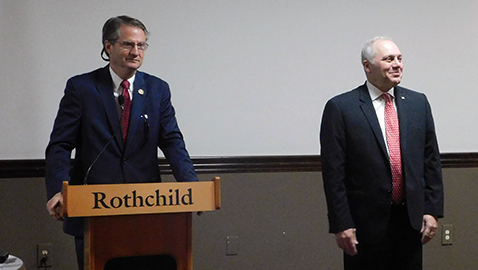 United States Representative and Minority Whip Steve Scalise made an early-morning stop for a breakfast meeting hosted by Representative Tim Burchett Thursday at the Rothchild Catering and Conference Center in West Knoxville.

Scalise came to not only show support for Burchett, who is in a re-election bid and is being challenged by Democrat Renee Hoyos, but also came to encourage Knoxville Republicans to vote on Tuesday.

Like many in Washington, D.C, Scalise (R –Louisiana) said that he feels that this is the most important election in the country’s history as President Donald Trump is seeking re-election and attempting to defeat former Vice President Joe Biden.

“This year, you have people (in the Democrat Party, who want to change what America looks like and what we are. You have a movement towards socialism, even though everybody knows that it doesn’t work. It hasn’t worked anywhere that it’s been tried.”

Recently, there have been movements and some politicians want to defund the police and this doesn’t sit well with Scalise.

“There used to be a time when people, everybody, stood by police and our military,” he said. “Now, the left wants to defund police and our men and women in uniform. They’ve even politicized that.

“If you’re going to make this partisan, then put me on the side that supports the military and the police. Joe Biden had eight years in the White House (as Vice President under Barrack Obama, and he sat by while Obama cut our military and we had more military people killed on training missions than we did on combat missions because Obama defunded the military because he didn’t believe in them and went around the world apologizing for American Exceptionalism.”

In his speech, Scalise voiced his pro-life views and spoke against the Green New Deal. He also said that he thought Trump would be victorious on Election Day because he continues to get support from swing states in the Rust Belt, including Pennsylvania.

“We’ve put people back to work in the steel industry in Pennsylvania and those people can’t wait to vote for Donald Trump,” he said.