By design on October 9, 2016Comments Off on Senator Howard Baker, Part One 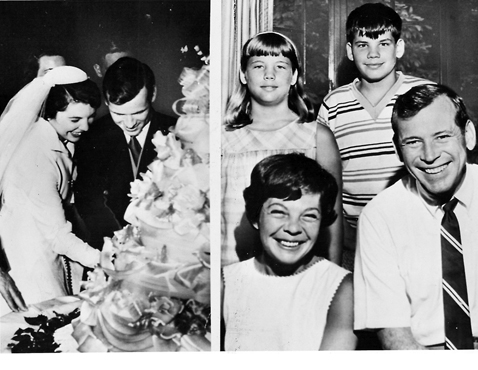 During the last decade, Tennessee has become more solidly Republican with the GOP occupying the governorship, both seats in the United States Senate, seven out of nine Congressional seats and a majority in the General Assembly.  Not so long ago, Tennessee was a reliably Democratic state.  The father of Tennessee’s modern Republican Party was Howard H. Baker, Jr.

Prior to Howard Baker’s election to the United States Senate in 1966, no Republican had ever been popularly elected to the U. S. Senate in Tennessee history.  The last Republican to occupy a seat in the Senate before Howard Baker was Newell Sanders of Chattanooga, who served a brief time by virtue of appointment by Governor Ben W. Hooper.  The last Republican to be elected governor of Tennessee before Winfield Dunn in 1970 was Alf Taylor in 1920.

Following the Great Depression, the Republican Party in Tennessee was little more than a regional organization almost totally confined to East Tennessee.  Had there not been a Howard Baker, Tennessee might well have drifted into the Republican column eventually, but it likely would have taken longer to achieve.

Howard Henry Baker, Jr. was born November 15, 1925 to Howard and Dora Ann Baker in Huntsville, Tennessee.  Known as “Howard Henry” during his youth to distinguish him from his father, the young Baker attended the prestigious McCallie School in Chattanooga and later went to Tulane University.  Even as a youngster, Howard Baker, Jr., showed promise quite early in life.  According to Baker’s biographer, Lee Annis, one of the future senator’s teachers remarked he “was a quiet young man with a good vocabulary” and noted Baker was “easy to get along with.”  Howard Henry also won an oratorical contest at the tender age of eleven.

Howard Baker began practicing law the same year he graduated from the University of Tennessee.  That was also the year his father, Howard, Sr. made a race for Congress in 1950.  Baker was running to unseat the incumbent, John Jennings.

Judge Jennings had been in Congress since 1939 and had turned back several serious attempts to defeat him, but Howard Baker, Sr. would prove to be a more serious threat than any other opponent.  The candidate called on his son to manage his campaign against the long-time incumbent.  Howard Baker, Sr. beat Congressman Jennings by an almost two-to-one margin.

Howard Baker, Jr. had occasion to visit Washington, D.C. before his father’s election to Congress.  His Great Aunt Mattie worked for Tennessee’s venerable U. S. senator Kenneth D. McKellar.  Aunt Mattie was apparently a highly unusual woman for her time, as Senator Baker recalled fondly, she cursed as well as any man, smoked incessantly and enjoyed a highball frequently.  Howard Baker, Sr. was the Republican nominee for governor in 1938 and for the U. S. Senate in 1940, running against the formidable Senator McKellar.  That particular campaign must have generated some interesting dinner table conversation from Baker’s Great Aunt Mattie.

The 1950 election had also returned Everett Dirksen to Capitol Hill.  Dirksen had been a Republican Congressman from Illinois from 1933 until his voluntary retirement in 1948.  Dirksen had been having serious problems with his vision and retired from Congress, only to run for the United States Senate in 1950 and defeat Majority Leader Scott Lucas.  Both Senator Dirksen and Congressman Baker arrived in Washington, D. C. in 1951 and it was there that Howard Baker, Jr. met the daughter and only child of Everett and Louella Dirksen.

Journalist Lloyd Shearer wrote a piece on Howard Baker in the summer of 1973 that ran nationally.  Joy Dirksen Baker related the story of the Baker – Dirksen courtship.

“I first met him in 1951 at a wedding in Johnson City, Tennessee,” Mrs. Baker said.  “It was at the wedding of Louise Reece, the daughter of the late Congressman Carroll Reece of Tennessee.  She and Howard’s sister Mary and I were very good friends…Anyway, Mary and I were in the backseat of a car – – – it was one of those pre-wedding parties – – – and some of the fellows dared Mary to smoke a cigar.”

Joy Baker noted, “And nobody was watching except Howard, who was lurking behind in the bushes.  And out he came.  He dragged his young sister out of the car and told me I was a very corruptive influence on his sister.  Then he pushed me into a rose bush.   I got thorn scratches all over me.”

“Next day – – – we all had sleeveless dresses to wear for the wedding – – – I looked pretty bad with Mercurochrome and Band-Aids all over my arm.”

Evidently Howard Baker felt bad about his behavior and telephoned Joy Dirksen from Huntsville.  According to Joy Dirksen Baker, “He said, ‘I’d like to come to Washington and apologize to you in person.  How about this Saturday?”

Joy Dirksen coolly replied that she had a date with Sam Oglesby, who was the legislative counsel for Senator Walter F. George of Georgia.  Baker was not so easily put off and asked about Sunday.  Joy Dirksen agreed and set a date for Sunday at 7 p.m.

Howard Baker’s apology must have been more than adequate for the two were engaged to be married within the half hour of his arrival at the Dirksen apartment.  “I know it sounds awful funny,” Joy Dirksen Baker recalled, “and impetuous.  But you see, I knew the Baker family quite well, his mother, his father, and both of his sisters.”

Howard Baker and Joy Dirksen were married in her hometown of Pekin, Illinois on December 22, 1951.

Howard H. Baker, Jr. practiced law for more than a decade while his father served in Congress.  Howard Baker, Sr. died unexpectedly of a heart attack on January 7, 1964, just five days before his birthday.  Congressman Baker was only sixty-one years old.  A special election was held and some thought Howard H. Baker, Jr. was a natural successor to his father’s Congressional seat.  In fact, Baker’s stepmother had first insisted he be the candidate, but Howard Baker replied she should run to succeed her husband.  There were a host of ambitious local Republicans who coveted the Congressional seat, but Irene Baker’s candidacy eliminated any possibility of GOP infighting and kept the seat in the Republican column.

Howard H. Baker, Jr. had his sights set on a bigger prize.  He intended to run for the United States Senate.

Tennessee politics had been slowly evolving from having been a solidly Democratic state.  In 1952, General Dwight D. Eisenhower had carried the Volunteer State in the presidential election.  Eisenhower repeated the feat in his 1956 reelection bid, despite the fact Tennessee Senator Estes Kefauver was on the Democratic ticket.  In 1960, Richard Nixon carried Tennessee over Massachusetts Senator John F. Kennedy.  Despite the repeated presidential victories for the GOP in Tennessee, Republicans had made few inroads into state and local offices outside the First and Second Congressional districts, which had always been traditional strongholds for the Republican Party.  In fact, the Second Congressional district in terms of never having elected anything but a Republican to Congress since the GOP has appeared on the ballot, is the most Republican district in the country.

As Baker prepared to run for the U. S. Senate, there were a few signs the Republican Party in Tennessee was gaining traction in local races.  Congressman James B. Frazier, Jr., a conservative Democrat, was defeated for renomination in 1962 by Wilkes Thrasher, Jr.  As the presidency of John F. Kennedy had dawned and approached full blossom, Wilkes Thrasher, Jr. was young, handsome, and striking, an ideal candidate during the age of Camelot.  The stately Congressman Frazier was an aging incumbent and his conservatism rankled many Kennedy Democrats, but more importantly, many Democrats who were supporters of Senators Estes Kefauver and Albert Gore backed Thrasher.  Frazier was a throw back to a different time, a different era.  The courtly Congressman Frazier was the past, while Wilkes Thrasher, Jr. clearly represented the future.    Yet he did not represent the future of the Third Congressional district.

Thrasher confidently expected to be elected to Congress, but Thrasher’s plans and election were upset by William E. Brock, III, the grandson and namesake of a Democratic United States senator from Tennessee.  Brock beat Thrasher and remained in Congress for eight years.  By 1963 all three Congressional seats in East Tennessee were occupied by Republicans.

Senator Kefauver had died from a ruptured aorta in August of 1963 and Governor Frank Clement had appointed Herbert S. “Hub” Walters to serve in the United States Senate.  Walters was past seventy at the time and many believed Senator Walters was merely a placeholder for Clement to make his own bid to win a seat in the United States Senate.  Governor Clement did announce he would be a candidate for the U. S. Senate and encountered a strong challenge from Congressman Ross Bass of Pulaski for the Democratic nomination.

Howard Baker campaigned for the Republican nomination at a time when many counties did not even bother to have a GOP primary election.  Baker was duly nominated for the special election to serve out the remainder of Estes Kefauver’s term, along with Memphis businessman Dan Kuykendall, who was running against Senator Albert Gore for the regular six-year term.

1964 was also a presidential election year and the Republican nominee was Arizona senator Barry Goldwater.  Goldwater’s candidacy actually hurt the Republican ticket in Tennessee.  Senator Goldwater, a forthright man if there ever was one, made it quite clear he had little use for the Tennessee Valley Authority and stated if he were elected president, he would sell it.  Howard Baker later recalled once he heard Barry Goldwater’s comments on TVA, he knew it would be almost impossible to win the 1964 election.

The Democrats were having their own problems; while Senator Albert Gore had no significant opposition inside the Democratic primary, Governor Frank Clement and Congressman Ross Bass had waged a hard fought campaign for the senatorial nomination for the short term.  Bass won the nomination, winning slightly more than fifty percent of the vote, while Clement won only thirty-six percent of the vote.  A third, less serious candidate, won the rest.

Howard Baker’s prediction about Barry Goldwater’s stand on the TVA proved to be accurate and despite the fact Baker won counties that had never voted for a Republican in a statewide race before, he lost narrowly to Congressman Bass, while Lyndon Johnson managed to win Tennessee by a healthy margin.  Johnson won the 1964 presidential election in a landslide, as Barry Goldwater carried only six states, five in the Deep South and his own Arizona.  Democrats were carried into the U. S. Senate and Congress on the Johnson tidal wave of votes.

Baker’s running mate in the 1964 election, Dan Kuykendall, had run a credible race against Senator Gore, winning just over forty-six percent of the vote.  Gore, who had been in the Senate for twelve years, had run somewhat better statewide than Ross Bass, defeating Kuykendall by over seventy-seven thousand votes.  Yet it was a portent of things to come.

Howard Baker was not morose about his defeat, although he certainly would have liked to win.  Baker realized Ross Bass had to run again in 1966 for the full six-year term and Governor Frank Clement was still nursing a grudge over his loss.  There was every reason for Baker to believe Tennessee Democrats would once again endure a brutal primary contest and he never stopped campaigning.

Senator Howard Baker, Part One added by design on October 9, 2016
View all posts by design →