By design on March 18, 2018Comments Off on Sheriff candidates answer questions 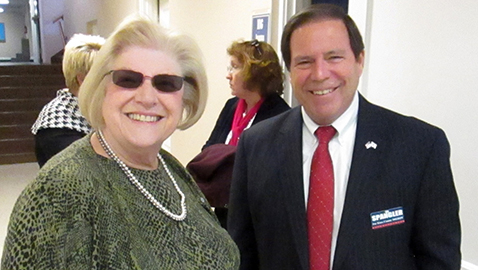 Last Wednesday both candidates, Tom Spangler and Lee Tramel, spoke before the Fountain City Business and Professional Association and answered questions submitted by the membership and audience.

Spangler and Tramel, both with many years in law enforcement, were given a few minutes to relate their backgrounds before taking questions. Spangler noted that he started the Knox County Regional Training Academy and instigated the aviation division.

“My experience matters and we need leadership from the top down and bottom up,” he said.

Tramel said he began the Senior Citizen Awareness program and called his years with the Sheriff’s Department “most rewarding.”

When asked about boosting patrols Spangler said he would look at the budget and see where we can pull things before we go to commission. Tramel said there are more officers on the streets than ever and  there are new precincts in Halls and Farragut. Both men agreed that the current 12-hour shifts for deputies are not acceptable.

“I’ll do away with that,” Spangler said. Tramel said the department should return to the six hours on and four hours off policy.

Both men spoke of reported low morale in the sheriff’s department. Tramel said that includes the correctional officers and said he would ask for employee input.

“The mayor has been stingy with the purse strings,” Tramel said and promised he would have regular monthly meetings with patrol.

When asked about the sheriff being involved with the community, Tramel said that with 445,000 residents in Knox County a sheriff is “pulled in a lot of directions” but added a sheriff should be accessible and pledged to be more visible.

Spangler also wants to be a more accessible sheriff. “People want to talk to you. You need to get out and about and not just send a patrol officer or the command staff,” Spangler said.

Asked if a former county official should be hired by the sheriff’s office, Tramel said that “if they have a worth and are a benefit to the county.”

Spangler said he is “not the guy to bring outside people in if I have someone in house that can do the job.”

Spangler said he has a good friendship with City Police Chief David Rausch and the fire and ambulance service. “We will all work well together.”

Speaking on school safety, Spangler said law enforcement “can’t wait until something happens.” He said there are school security officers in every school but a sheriff’s officer covers two to three schools.

“I went to a school recently, buzzed in, and was let in without any questions. It’s going to take a collaborative effort,” he said.

“The rules have changed. These (security) officers are trained and need to go to the threat,” Tramel said. “We’ve got to stay fluid.”

Tramel said that the opioid epidemic is the greatest threat to Knox County. “We need to reach down to the 4th and 5th graders and educate them,” he commented.

Spangler said the greatest threat is not doing anything about the opioid situation.

When asked about patrol resources, Tramel said he would look at moving some of the patrol zones and if you “cut addiction it cuts crime.”

Spangler said that training is important. He noted that technology has changed but “boots on the street” and investigative work is also needed to fight crime.

In summary Tramel said that he has a plan to expand “what we’ve done” and use outside the box thinking within the Knox County Sheriff’s Department.

Spangler said he has “been there and done that” since he served with the department and served as interim sheriff.

“Look at both candidates and vote,” Spangler said.