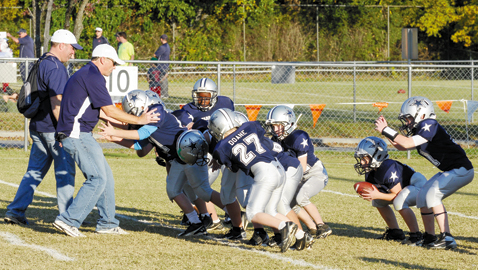 Winning a championship in the Knox Metro Youth Football League is a thrill. Can you imagine doing it five years in a row?

That’s happened for six youngsters, who were members of this season’s Catholic Senior Midget team, which rolled past Halls 51-22 in the local youth league’s title game for 13 and 14 year old players.

For Morgan Ernst, Jack Sompayrac, Roland Ryan, Joe Fluker, James Davis and Tyler Hayes, it was their fifth championship season in a row on the Catholic team coached by Dickie Sompayrac. They started their title string as 9 year old players in the Cutter division, then celebrated championship seasons in the Minor Pee Wee, Pee Wee and Junior Midget divisions.

Another seven or eight players were on Sompayrac’s team for four years but began playing this season for Senior Midget teams that will feed their future high school programs. Senior Midget players mainly consist of middle schoolers.

“Seventeen of the 21 players I had on this year’s team will probably come to Catholic High,” said Sompayrac, who is principal at Catholic High School.

In the finals, Catholic led by only 16-14 with three minutes to go in the first half. A strip and fumble recovery led to another Irish touchdown. The determined Halls team scored on its first possession in the second half, but Catholic eventually pulled way.

Ernst, a linebacker, made 19 tackles to lead the defense.

“He’s our man-child out there,” said the coach. “He plays beyond his years.”

In the Senior Midget semifinals, Catholic defeated Farragut 35-14 and Halls eliminated the Falcons 40-20.

TITLE TEAMS: Fifteen teams won championships this season in the Knox Metro Youth Football League, counting all seven age groups and divisions. There were a total of 126 teams, including approximately 2,000 players, from 20 commissions throughout Knoxville and Knox County.

BEATING ADVERSITY: On the way to winning the Minor Pee Wee XFL crown, Coach Sammy Vaughn’s Falcons had to overcome the loss of their starting quarterback in the semifinals and get past Central 12-6 in double overtime.

Ty Humphreys went out with a knee injury midway through the third quarter, pointed out Butch Ivester, the team’s offensive coordinator. Backup QB Jay Riddle ended up scoring the winning touchdown on a bootleg on fourth-and-two.

The Falcons went on to blank Halls 6-0 in the championship game. It was the ninth shutout of the season for the Falcons, who were 10-0 in the league and 4-0 in bowl games.

TURNAROUND: Coach Todd Hazelwood called it “the story of the year.” After having a won-loss record of 5-63 over the previous four seasons, Farragut’s Junior Midget team knocked off Catholic 14-8 to capture the AFC title.

Farragut had lost to Catholic 6-0 in the regular season. Farragut also avenged a 25-0 loss to Central with an 8-6 semifinal win.

Hazelwood became the team’s head coach last year. “We had some kids come back to the team when they started seeing our improvement,” he said.

“This team earned everything they got this year. They kept believing. I’m very proud of them.”

In its last six games, Farragut gave up only 16 points.