By design on September 8, 2019Comments Off on The Smoky Mountain Railroad 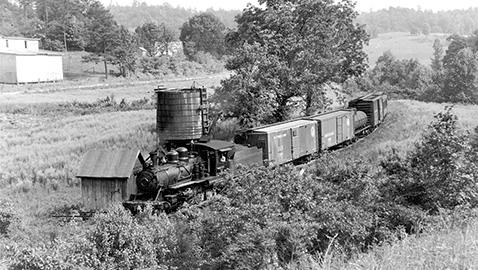 Knoxville’s railroad history is a proud one.  Its two beautifully-preserved downtown depots, the Louisville & Nashville (L&N) and the Southern, stand as testaments to that heritage.  Another downtown fixture, the “Three Rivers Rambler” passenger train, returns the lonesome whistles of iron horses to a city once filled with them.

Yet, many Knoxvillians, both new and not-so-new, are unaware of another railroad that served downtown Knoxville for a half-century.  Its terminal stood in the shadow of The Hill, the University of Tennessee’s main campus.  Its train crews worked hard just to cross the Tennessee River on departure and to enter the terminal on arrival.

This was the Smoky Mountain Railroad, originally built as the Knoxville, Sevierville & Eastern Railway, or KS&E.  Those initials, as well as the trains’ 11 mile per hour speeds, inspired the line’s still-used nickname, “Knoxville, Slow & Easy.”  From 1910 until 1961, the “Slow & Easy” linked downtown Knoxville with Sevierville.  During the Roaring Twenties, an affiliated line, the Pigeon River Railroad, extended service to Pigeon Forge and McCookville.

Headlines at both ends of the line celebrated its completion.  It provided new forms of both transportation and entertainment to patrons in that much simpler age.  It predated Chapman Highway by a quarter-century and today’s Exit 407 by decades.  Before the mid-Thirties, a 2-1/4 hour train ride was the fastest conveyance between Knoxville and Sevierville for passengers and freight.

During its era, the Smoky Mountain Railroad operated unique steam locomotives and wooden passenger and freight cars.  Thus, authors and rail fans came from afar to write about and photograph the “Slow & Easy” before it was too late.  In 1949, writer William H. Schmidt Jr. dubbed Smoky Mountain “the Shrine of Shortline Railroading.”  By this time, the L&N and Southern were operating diesel-powered streamliners and all-steel fast freights.

The railroad’s Knoxville terminal was in the Second Creek valley at the intersection of Main and Cumberland Avenues.  In 1982, the same site hosted the World’s Fair’s Australian Pavilion.  Today, university parking lots S7 and C18 occupy the property.

Trains departing the terminal briefly entered the riverfront.  Then, they backed up to the Southern’s Knoxville & Augusta (K&A) “highline,” where they reversed again and crossed the river.  Just over two miles of K&A trackage rights permitted Sevierville-bound trains to travel to a switch in Vestal, where the “Slow & Easy” proper began.

On the site of today’s Charter E. Doyle Park was Crusher Wye, a locomotive turning track and spur which served the marble quarry just off Stone Road.  A few miles beyond, the “Slow & Easy” passed through a deep rock cut in Brown Mountain.  Today, the cut is just across Chapman Highway from Ye Olde Steak House.

In its final years, the railroad’s track and trestles deteriorated, making derailments commonplace.  The proliferation of trucks and buses on Chapman Highway sealed the line’s fate.  Its final train ran in January, 1961, and its rails were removed five years later.

Many Knox and Sevier Countians have fond, vivid memories of the “Slow & Easy” to this day, despite its unfortunate ending.  Special events at both ends of the line and points in between will commemorate its 110th anniversary this Fall and Winter.

The Smoky Mountain Railroad added by design on September 8, 2019
View all posts by design →