Soon, Chris Hunter can sing ‘I’m in the Army Now’ 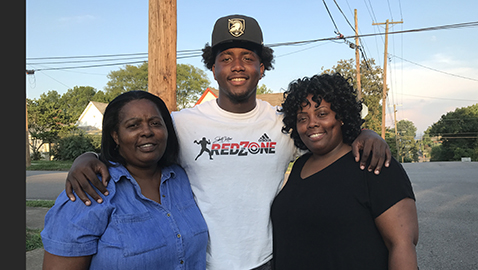 An exciting new chapter in Chris Hunter’s life is scheduled to begin today.

The young man from Knoxville, an Austin-East High graduate who was the school’s male Student-Athlete of the Year, will officially become a cadet in the United States Military Academy at West Point, N.Y.

Hunter, a standout on the Roadrunners’ football team last fall, signed to play for the Army Black Knights and will be on its prep school team this fall.

After a “send-off party” Friday night at Emerald Youth Foundation, Chris, along with his mother Sabrina Robinson and grandmother Louise Fletcher, were to have left Sunday morning on a flight to New Jersey, where Hunter would stay in a hotel with the rest of the new cadet appointees.

“On Monday (July 16) they will have the induction ceremony and Chris will go from civilian to being in the Army,” said Fletcher. “He will be sworn in and inducted for prep school. Then he’ll be officially in the military.”

It’s an emotional time, particularly for mom and “Granny.”

“It’s kind of bittersweet,” said Louise. “I’m happy that he got the opportunity to go to West Point. It’s a long way away, but it’s a good school.

“It’s been kind of stressful, especially the last couple of weeks, trying to get everything prepared and him getting to see all of his friends.”

The emotional part of it probably won’t sink in “until we actually have to catch the flight back without him,” she added.

“He won’t have a phone either during the first couple of weeks of boot camp. We’ll have to write letters. No phones, no emails. Just old fashion communication.

“In fact, that reminds me, I’ve got to get by the post office and get envelopes already with postage on them.”

Mom too knows there will be tears again when she and Louise get back on the plane to Knoxville Tuesday. There were tears when they made the trip to West Point earlier when Hunter signed scholarship papers.

It’s not easy for Chris, either.

“I’ve lived here all my life and I have a lot of close friends and family,” said Hunter, who signed as an inside linebacker. “So it’s really going to be tough leaving, but I know that I’ve got to do it to excel in my future.”

Fletcher believes her grandson will succeed.

“He’s a competitor,” she said. “Boot camp and the whole experience will be hard, but the fact that he’s a competitor and likes to be at the top is going to push him to do the very best that he can do. Hopefully, that’s a big positive for him.”

Hunter said his No. 1 goal is to graduate from West Point and he would like to come out a Sergeant. He hopes to help Army win some big games and he also has a dream to put himself in a position to play in the NFL someday.