By design on September 9, 2012Comments Off on South-Doyle Delivers Shutout over Heritage 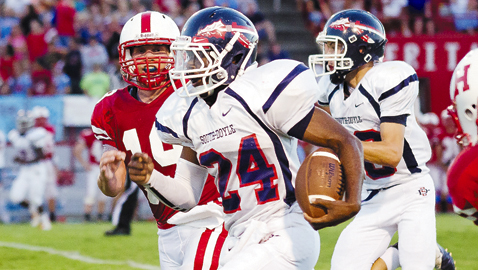 It’s not often that Head Coach Clark Duncan of South-Doyle offers no advice for his team to improve upon.  So far this year, South-Doyle has executed an awesome display of high-octane running and stingy defense that is difficult to critique.

After Friday night’s shutout in Blount County, Coach Duncan offered this to his post-game speech: “I don’t know how many teams in the state of Tennessee are undefeated tonight, but I know South-Doyle is one of them!”  South Doyle advances to a 3-0 record, the strongest opening since 2001, after the 40-0 win over Heritage,while Heritage falls to 0-3.

The game started with both teams punting on their opening series.  Heritage had to punt from within their end zone, giving South-Doyle poise to score their first touchdown.  Brody Rollins took the snap and ran it 32 yards to give the Cherokee’s a 7-0 lead.  On the ensuing possession, with South-Doyle on defense, Jocquez Bruce stripped the ball from a Heritage running back and returned 30 yards for another touchdown, just 11 seconds after their first touchdown.

Two minutes later, Jocquez Bruce, the quick sophomore,scored an offensive touchdown on a 53 yard run to pute South-Doyle up 20-0 after a missed extra point.  South-Doyle’s defense did not give up a single first down through the first quarter.  Coach Duncan was quick to praise the defense, “We’re so physical upfront, it’s exciting that they can play the run the way they do and put pressure on the quarterback. “

South-Doyle’s only apparent weakness is special teams, and they attempted get some game-time practice with a fake punt on fourth and six in the second quarter.  Jacob Faucette, the typical passing quarterback for the Cherokee’s, took the snap on the fake punt and hit sophomore Brandon Duplantis for a 42-yard touchdown pass. To put the Cherokee’s up 27-0.  Brody Rollins, the quarterback who has routinely has acted as a running back, sealed the half with a 27-yard run to put South-Doyle up 33-0 at halftime.

Rollins would deliver a final running touchdown in the third quarter for 44-yards after he kept the ball on what was supposed to be a designed pitch.

South-Doyle faces a real challenge this week at Morristown West, a perennial powerhouse in AAA District 2.  Morristown West is 3-1 with their first loss coming against Science Hill.  Coach Duncan knows the upcoming week is a true test of his team.  “Morristown West is a huge game.  We’re looking to not just get into the playoffs, but we want home field advantage.  You’ve got to beat the Morristown West’s and Sevier County’s,” said Coach Duncan.

After the game, defensive line coach Jeff Bryant was quick to share in the team’s excitement over both the strong start and the shutout.  “It’s been a long time since we’ve been 3 and 0.  We need to stay focused this week and ready to come to work with a solid game-plan. Morristown West is good,” said Jeff Bryant. He added, “We’ve got a few kids that are hurt and it’d be good to have everyone back.”

South-Doyle Delivers Shutout over Heritage added by design on September 9, 2012
View all posts by design →