South-Doyle is the new ‘raining’ Region 2-5A champion

By design on October 27, 2019Comments Off on South-Doyle is the new ‘raining’ Region 2-5A champion

PHOTO BY SHELLEY JOHNSON With the rain pouring down, South-Doyle's Elijah Young takes off on one of his five touchdown dashes in the Cherokees' 38-10 win over Central Friday night. 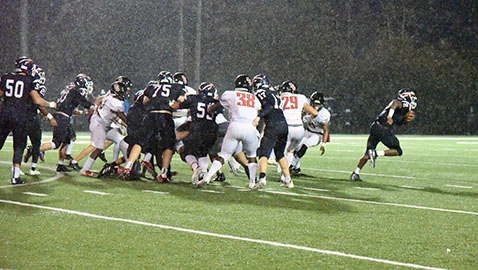 By Steve Williams
Central’s highly regarded football team had a tough time holding on to the football in the rainy conditions at Billy K. Nicely Stadium in South Knoxville Friday night.
But the Bobcats had an even tougher time getting a hold of Elijah Young.
The tough, quick and elusive star running back for South-Doyle, operating exclusively out of a Wildcat formation for the first time this season, scored five times on long touchdown runs to lead the Cherokees to a 38-10 win over the Bobcats and the Region 2-5A regular season championship.
Defending state champion Central also saw its 21-game win streak uh, well, go down the drain.
It was expected to be an exciting battle, but the Bobcats coughed up the ball 10 times over the course of the game and lost three of the fumbles.
Two times after the Cherokees got it, Young took off and scored on the ensuing play.
In all, the Missouri commit had TD runs of 34, 25, 60, 42 and 19 yards and rushed for 249 yards on 27 carries. Junior placekicker Ewan Johnson converted the five extra points and a 36-yard field goal.
South-Doyle closed the book on region play with a 5-1 record. The Cherokees will take an 8-2 overall worksheet into this Friday’s showdown against undefeated Powell, the Region 3-5A champ.
It will be homecoming and Senior Night and the S-D players also will be wearing their “South of the River” Throwback jerseys for the occasion, which had to be postponed two weeks ago.
Central (4-1, 8-1) will try to start a new streak at Gibbs. The Bobcats could still be heard from down the playoff trail.
“This was a big game,” said the 5-10, 180-pound Young, who was one of the state’s top sprinters in track last spring. “All over you’ve got (signs about) the South-Doyle and Central thing. It’s been a rivalry. The 21-game win streak. We had to fight for it. We knew it was going to be a battle.”
Young said the weather conditions led to the Cherokees running out of the Wildcat.
“We probably won’t ever run this again. This (came) just out of nowhere (with) the rain. We had to switch it up. It was a today thing. That’s it.”
Young gave credit to the defense. “They played a big role in it. We practiced everything that we knew they were going to try to do and we executed it.”
While the Bobcats had some trouble with snaps and handoff exchanges, South-Doyle senior center Jordun Wil-son (6-2, 280) was rock solid with his important role in the Wildcat despite the rains.
“It was really tough,” said Wilson. “I had different towels coming in and out every quarter to make sure my hands stayed dry and to make sure it was easy for me to get the snap up. I also had to ease the pressure on the snap so I knew I could get it there. My snaps got to the (Wildcat) and we didn’t have any problem with it.”
Wilson said the Cherokees’ motivation for the game stemmed from last year.
“We went out in the region championship against Central 35-0. And from then on out, we’ve heard everybody’s been saying ‘South-Doyle is not tough enough. You punch South-Doyle in the mouth and they’re going to give up.’
“And for 365 days we’ve been riding on that grit, to push us and win the football game like we did. We had to be more physical, tougher. We had to overcome adversity with the rain. We had to do what it took to win that game.”
Central committed its first big mistake late in the first quarter when the ball ended up on the ground at the Bob-cats’ 34-yard line after an errant exchange. TaShawn Patrick pounced on it.
Young scored on first down with maybe his best run of the night. He broke a tackle on the corner and then fought his way into the end zone, simply refusing to go down.
A 25-yard TD pass from Central quarterback Dakota Fawver to Braden Gaston, after Sean Randolph’s fumble recovery on an S-D punt return, and Jarred Swislosky’s 29-yard field goal put the Bobcats on top 10-7 a minute before halftime.
That gave Young more than enough time to retaliate. Ezra Young returned the kickoff to the Central 25 and Eli-jah shot up the middle on the next play to put the Cherokees back ahead 14-10.
Central went three and out to start the third quarter and Young bolted 60 yards off left tackle to make it 21-10.
Johnson added his field goal midway through the third quarter.
Trailing 24-10, Central marched to the Cherokees’ 31 before Terrell Brown recovered a fumble by Fawver with 10:16 left in the game.
Young raced 42 yards down the middle of the field on the ensuing play to up the score to 31-10. His final TD run, a zig zag 19-yarder, came with 6:21 to go.
“That rain hurt us tonight,” said Fawver. “But that’s no excuse. We could have played a lot better on both sides of the ball. Elijah is a good ballplayer. We killed ourselves a lot with fumbles and penalties. Just a lot of miscues.
“Rain makes it a lot more difficult and slippery. The constant rain. It never let up tonight. None.”
Neither did Elijah and the Cherokees.

South-Doyle is the new ‘raining’ Region 2-5A champion added by design on October 27, 2019
View all posts by design →