Story’s final TSSAA chapter is about winning and having fun

By design on May 28, 2018Comments Off on Story’s final TSSAA chapter is about winning and having fun 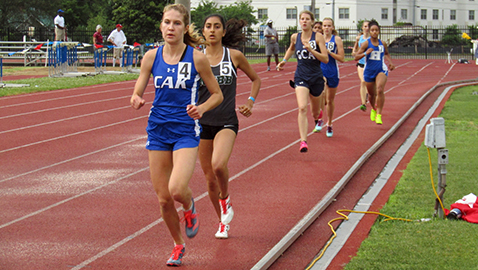 The Christian Academy of Knoxville senior swept the three distance races at the Division II-A track and field meet Friday at MTSU in Murfreesboro.

On a day that included threatening skies, raindrops and eventually a lightning delay, Coach Tony Cosey said Story’s main objective was about winning and not times.

The Stanford signee led the CAK girls to a third place finish in the team scoring behind runner-up Webb School.

Story won her first TSSAA state championship in the 3200 as an eighth grader in 2014.

Counting her part on three state champion relay teams, Story has a total of 15 TSSAA championships in her prep career. That also includes two state crowns in cross-country.

“It was a special last meet, and I was relaxed,” said Story. “There wasn’t a planned strategy other than to win and have fun.

“Obviously, I was not attempting a PR (personal record) with four races in a few hours, but I am used to that!

“I was happy with my final State because it ended in a relay with my team. I loved finishing with a relay.”

In the girls’ Large division on Thursday, sophomore Ellie Bachman took first place in the 800 with a time of 2:16.28 to lead Hardin Valley Academy to third place in the final team scoring.

Blake Blakemore, only a sophomore, sparkled in Wednesday’s Small Schools action as she won the 200 dash in 24.74.

Story’s final TSSAA chapter is about winning and having fun added by design on May 28, 2018
View all posts by design →