Tackling a head-on problem head on

By design on August 21, 2016Comments Off on Tackling a head-on problem head on 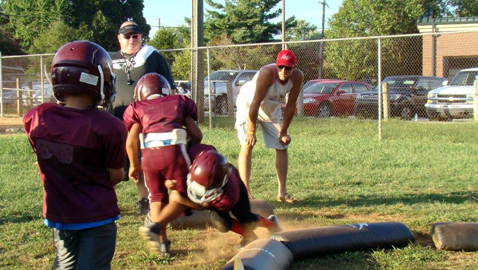 Many years ago, when youth soccer started growing in popularity in this country, I wondered if soccer might someday replace football as the game played at Neyland Stadium and venues of other major universities.

In what I saw as a softer America, many parents of a new generation preferred their boys play a sport less physical than football.

Soccer continued to grow but never seriously became a threat to football. There was room for both sports.

Football, however, eventually became its own worst enemy. The contact sport turned into a collision sport. Fundamental tackling gave way to bigger and faster players using their bodies as missiles. Helmets and equipment couldn’t always provide adequate safety from the blows.

It’s plays like this that has made football the most popular sport in this country for years.

Plays like this also have the sport of football facing a new challenge today. Thanks to advancement in medicine and technology, we now know the long term effects of concussions and head injuries that can result from playing football. With this information has come a cause for alarm and the need to make the game safer. To accomplish this it will take a team effort from youth football all the way up to the NFL.

Concussions will never be eliminated from the sport but can be minimized with changes in how the game is played.

I dropped in unannounced on a 7 year-old team’s practice last week and saw firsthand coaches working hard in taking steps in that direction.

You may not recognize their names, but you should appreciate the efforts of Shane Cox and Clarence Bennett as much as those of Fulton High’s Rob Black, UT’s Butch Jones or Gary Kubiak of the Super Bowl champion Denver Broncos.

Cox is head coach of the Falcons’ 7-year-old team and Bennett’s a burly assistant who has a booming voice and a special way with his “babies.”

The two of them, along with assistant coach James Parrott, worked up a good sweat before the sun went down last Tuesday at Christenberry ball field doing something very important. They were teaching a safe way to tackle.

“I’ve been studying the Seattle Seahawks,” said Bennett. “We use their tackling drills and technique. It’s a form of rugby tackling … keeping the head out of the tackle.”

It’s really a new way of doing something very old.

The rugby-type tackle was used when football was born and played without headgear and later when players wore leather helmets without facemasks.

As a high school football official for close to 20 years, I remember attending a preseason state rules meeting about five years ago and the TSSAA representative informing members of our association about procedures we should follow if we suspected a player having concussion symptoms.

Since that time, points of emphasis have been placed on illegal contact in the head area and against defenseless players. Violators are ejected for “targeting.”

Bennett said they are teaching their players to use their shoulder pad to make first contact on an opponent’s thigh, get their head to the outside and finish the tackle by “wrapping up” with their arms.

Being the coaches of the youngest team, Bennett said, “We’re basically the foundation” of this teaching process that now is being used all the way up to the Seahawks and professional ranks.

Bennett pointed out this was the second year coaches in the Knox Metro Youth Football League went through the “Heads Up Football” program, which emphasizes the importance of a player “keeping his head up and out of the tackle.” He said it is the first season he and the Falcon coaches have taught the rugby-type tackle.

With news about the effects of concussions and the movie Concussion, the number of players is not as high this season in the Falcons’ organization, which has been the most successful program from top to bottom locally for several years, said Cox, who added he’s seen four concussions in 14 seasons with all of them involving players on the 11 to 14-year-old age teams.

“We’ve dropped a little bit because of all the negativity,” said Cox. “We have about 25 players per team in our program, while we used to have 30. We also used to have two teams for every other age group.

“It’s not just here. We played in a tournament in Atlanta this past weekend and I saw fewer teams and players there than I have in the past.”

The issues in the sport of football are real, but I can’t see football fading away from the sports landscape like we’ve seen with heavyweight boxing. Football is too big, too rich and too popular to fall.

Football will evolve to be as safe as it can be, but there will always be a risk-reward element for prospective players to weigh.

Tackling a head-on problem head on added by design on August 21, 2016
View all posts by design →