By design on June 24, 2018Comments Off on Taking the Dandridge Loop 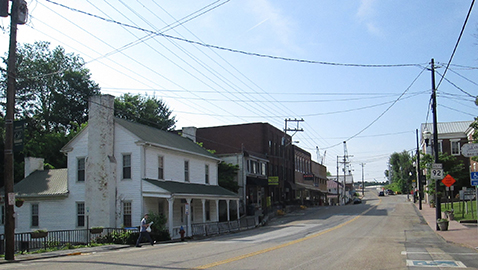 If you’ve ever been to our state’s oldest city, Jonesborough, you may be delighted to learn that our “second earliest city” is nearby and just as historic and interesting. Dandridge is east of Knoxville and not far off Interstate 40.

A day’s drive to Dandridge and back by the way of Sevierville can easily be done with only a slight touch of the busy interstate. You can make a loop of the outing and arrive back in Knox County without ever fighting the tourist or commercial traffic.  If you take Asheville Highway east to its split and hang a right along Highway 25 you’ll pass through the Knox County eastern community of Carter. You might want to take a quick side trip there to Paschal Carter Park and see its unique water mill.

Back on 25 you’ll roll through farmlands and pass a couple roads that lead over to Kodak, but continue on until you go under Interstate 40. Just beyond there you arrive in Dandridge.

The sheer number of historic structures in the little town is astonishing. Among them are the Tinsley-Bible Drug Store, numerous shops in historic buildings, the Roper Mansion, the courthouse and the former Jefferson County Jail. There’s also a graveyard that dates to before the Revolutionary War.

The old jail, built in 1845, sits behind the county court house. A small museum is located inside the courthouse and is now used by the local education department. The second floor still contains bars on the windows. The Thomas Tavern in Dandridge was built in 1843.

Near the flood wall, built by TVA to save the city from the rising waters after the creation of Douglas Lake, is the Shepard Inn which is now a venue center and Bed and Breakfast.

The town of about 3,000 residents Also has a  general area that contains marinas, restaurants and a golf course. The Dandridge Visitors Center is located at 137 East Main Street and you can contact it by calling (865) 397-7420. The center is located between the Coach House and Hickman Tavern, which now serves as town hall. It’s open Monday through Saturday from 10 a.m. until 4 p.m.  You can also find town information at www.townofdandridge.com.

Dandridge was named for George Washington’s wife, Martha Dandridge Washington. It is said that when plans for Douglas Lake were announced that citizens contacted Eleanor Roosevelt and pleaded successfully to save their community. Today the downtown sits on the verge of the lake waters, protected by a large earthen wall.

When you leave this little gem of a town you may want to head south along Highway 92 to Chestnut Hill. When you reach Highway 411 you will see Bush Brothers farm and the Bush Visitor Center across the intersection.

The popular free tour of the company’s facility began back in 1897 at the A.J. Bush General Store. Today thousands of people tour the center, shop in the gift shop, and dine at the café which serves a general menu and, of course, lots of Bush beans.

Don’t forget to walk through the huge open can of beans and get your photo with the Bush dog, Duke.

If you head east on Highway 411 you’ll arrive in Newport or, if you want to loop back to Knox County, head west and drive through Sevierville. Continue on 411 and you’ll pass through Seymour and return home by way of Chapman Highway.

Taking the Dandridge Loop added by design on June 24, 2018
View all posts by design →