By design on April 19, 2020Comments Off on Taking the Dayton Loop 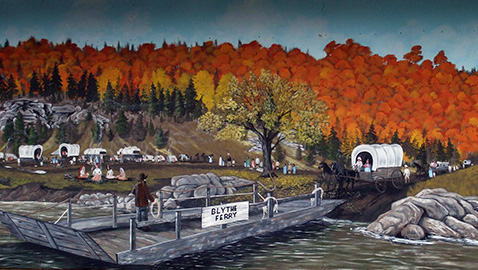 We have been asked to keep our distance, wear our masks, and basically stay at home for safety these days. But there are some places we can drive to without encountering other people or endangering ourselves or others.

A family day outing to nearby places is a great idea, just be sure to use hand cleaner after gassing up your vehicle. Isn’t it odd that when we can’t travel much when the cost of gasoline is so low?

An ideal drive that the kids will find entertaining is a daytrip to Dayton, Tn. The adventure begins driving down to Athens and taking Highway 30 west to Decatur. That Meigs County seat has a neat courthouse, a traditional courthouse square, and a mural of the old Blythe Ferry crossing, painted by Bill McDonald.

Blythe’s Ferry is located further south and you could turn south on Highway 58 and get there or continue west along Highway 30, aptly known as the William Jennings Bryan Highway, to another history ferry crossing. The Old Washington Ferry and the little settlement of Old Washington are on the waters of the Tennessee River. Once a thriving community and once the home of Judge David Campbell the community today is just a few houses and a little park. The ferry landing on the west side of the river still has the ferry landing ramp and a few items left from when the ferry was replaced by the tall Washington Bridge.

It was the Rhea County seat until 1889 when a vote moved the seat to Dayton. It is an interesting place to pause and look around.

Continuing west of Highway 30 you’ll soon see why it has been named to honor Bryan.

Just before you reach Dayton you’ll come to Bryan College, a Christian university named in honor of the same man. Bryan defended Tennessee’s anti-evolution law in Dayton against Clarence Darrow. Citizens were impressed by Bryan, who won the court battle only to lose in a court decision. He became ill after the trial and died.

The Rhea courthouse, in Dayton, still stands and was the site of the “Scopes Monkey Trial” where Bryan and Darrow faced off. It’s normally open to the public with a basement museum and, when open, you can visit the upstairs courtroom where the event took place in 1925.

If you follow Highway 29 south of town you’ll come to Highway 60, or Hiwassee Road. Follow it south to the Blythe Ferry Bridge and cross over Chickamauga Lake. The Blythe Ferry Park is on your left after you cross the bridge. You’ll have to go about a half mile before turning left and circling back along Blythe Ferry Lane.

When you arrive at the abandoned ferry landing you will be visiting what was once where a huge encampment of Cherokee tribe members were forcibly removed from their homeland and sent west to make way for white settlers.

There’s a lot of other lesser known places in that area worth noting including the Garrison Cemetery where the Hiwassee Garrison Fort once stood, Hiwassee Island that was once a large Native American village that’s now a wildlife refuge, and the Sand Crane Viewing Park.

You can loop back up Highway 58 north to Decatur and return to Knoxville that way. As you turn north and cross the Hiwassee Bridge you may notice a historic marker for the Agency Creek location, a fort and Indian Agency.

Taking the Dayton Loop added by design on April 19, 2020
View all posts by design →