Tennessee Governors & the Path to the US Senate, XV

By design on May 17, 2020Comments Off on Tennessee Governors & the Path to the US Senate, XV 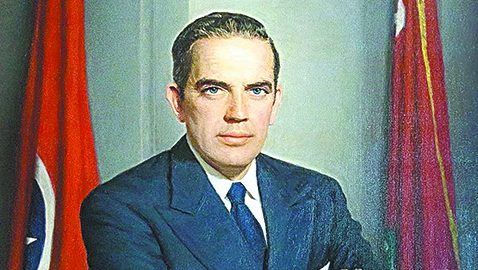 With the election of Kenneth D. McKellar to the United States Senate, the senatorial ambitions of Tennessee’s governors became a trifle more circumspect.  Some like Gordon Browning never really gave up the desire to go to the U. S. Senate.  A congressman for twelve years, Browning ran for the Senate in 1934 and lost to the incumbent, Nathan L. Bachman, in the primary.  It was only after his losing bid for the United States Senate Browning finally became governor.  Prentice Cooper eyed the Senate seat of Tom Stewart in 1942, but eventually chose to run for a third two-year term as governor.  Cooper did run for the U. S. Senate, albeit fourteen years after his last term as governor expired.

The men Tennesseans chose to represent them in the U. S. Senate came from other political backgrounds after senators were popularly nominated and elected.  Tennessee’s longest serving senator, Kenneth McKellar, had been a congressman before defeating an incumbent senator and two former governors to get to the Senate.  John Knight Shields had been Chief Justice of the Tennessee Supreme Court and his successor, Lawrence D. Tyson had been elected to no higher office than representative in the Tennessee House of Representatives, albeit he had served as Speaker of the House.  William E. Brock was a successful businessman; Cordell Hull had a long career in the House of Representatives before being elected to the Senate in 1930.  Nathan L. Bachman, a former justice of the Tennessee Supreme Court, was appointed to serve following Cordell Hull’s resignation from the Senate to become President Franklin Roosevelt’s Secretary of State.  Bachman won two elections before dying of a heart attack a few months into his first full six-year term.  George L. Berry had never been elected to anything and was a labor leader when Governor Gordon Browning appointed him to serve until the next election following the death of Nathan Bachman.  Berry was defeated by Tom Stewart in a 1938 special election; Stewart had been a local district attorney before being elected to the Senate.

Tom Stewart lost to Congressman Estes Kefauver in 1948 and McKellar, old and frail, finally was toppled by Congressman Albert Gore in 1952.  Kefauver died in office and his death sparked two of the hardest fought Democratic primaries in Tennessee’s history, with Congressman Ross Bass beating Governor Frank Clement and Howard Baker in 1964.  Two years later, Clement beat Bass and lost to Republican Howard Baker, who had never held elective office before winning a seat in the Senate in 1966.  Congressman Bill Brock beat Senator Albert Gore in 1970 and he lost his seat in 1976 to Jim Sasser, who had never held elective office.  Senator Baker retired in 1984 and his Senate seat was won by Congressman Albert Gore, Jr.  Sasser was defeated in 1994 by Dr. Bill Frist, who had never held elective office prior to being elected to the U. S. Senate.  Likewise, Fred Thompson, sometime lawyer, sometime actor, beat Congressman Jim Cooper in the 1994 special election to fill out the reminder of Vice President Al Gore’s term of office.  The incumbent, Harlan Mathews, did not run.  Bob Corker had been mayor of Chattanooga before being elected to the U. S. Senate.

Since Tennessee began popularly electing U.S. senators in 1916, only one former governor has made it to the United States Senate: Lamar Alexander.  Since Tennesseans could cast ballots and select their own senators, they seem to have preferred promoting congressmen to the U. S. Senate.

In 1934, former governor Ben W. Hooper tried for a second time to defeat Kenneth D. McKellar.  Hooper joined forces with Lewis Pope, who had bolted the Democratic Party and ran as an Independent in the general election.  Twice elected governor by a combine of Republicans and Independent Democrats known as “fusionists”, Hooper may have hoped lightning would strike again.  McKellar was too personally popular and too well entrenched and crushed Hooper, effectively extinguishing his political career.  Former governor Prentice Cooper had flirted with the idea of running for the U. S. Senate several times and finally made the race in 1958, opposing Senator Albert Gore.  Cooper had originally campaigned to win back the governorship, but eventually switched to the Senate race.  Despite a well-funded and organized campaign, Cooper lost decisively.

1952 was the year the old order went out in Tennessee; Congressman Albert Gore defeated Senator K. D. McKellar and thirty-two year old Frank G. Clement beat veteran Governor Gordon Browning.  Two years later, Clement became the first governor to win a four-year term, once again easily turning back a determined challenge by Gordon Browning.  Clement could not seek reelection in 1958 and after six years as governor, he thought about running against Senator Albert Gore.  Clement decided to wait and made a political comeback in 1962, winning a third term as governor.  Several months into his term of office, Senator Estes Kefauver unexpectedly died.  Clement appointed Herbert “Hub” Walters to fill the vacancy.  Seventy-one years old, few thought Walters would run in the 1964 special election to serve the two years remaining on Kefauver’s term.  Most believed Walters would serve as a placeholder while Clement sought election to the United States Senate.  Congressman Ross Bass had served in Congress for ten years and made the decision to seek the Democratic nomination.  Frank Clement had every reason to feel confident that he could easily win the nomination; Bass had never been elected to statewide office or run outside his own congressional district.  Clement had been elected governor three times, winning both the primary and general elections six times.  Frank Clement had never lost an election.  Frank Clement also had the extra-added advantage of heading a state administration, rich in patronage and appointees who would coalescence behind his candidacy.  Clement looked to be quite a formidable candidate.

Less than a month after Kefauver’s death, Congressman Bass was off on “a listening tour” of Tennessee to see what reaction Democrats had to his possible candidacy for the Senate.  Bass started his tour in West Tennessee and immediately reported he liked what he was hearing.  “Up to this point,” the Congressman said, “I’m still encouraged by the response I’ve had from people interested in electing a U. S. senator in 1964.”  While visiting Jackson, Tennessee, Bass was careful to say should he run for the Senate, it was not against any particular person, but rather “to win the race.”  “I think the major issues for the Senate seat held by the late Sen. Estes Kefauver will be experience in the House and the political philosophy of the candidate,” Bass said, which also happened to emphasize his own political experience to the detriment of that of Frank Clement.  Bass opined the people of Tennessee likely wanted “the Bass philosophy.”

Thought to be slightly more liberal than Clement, Bass tried to define his political philosophy.  “I don’t conform to political ideologies,” Bass insisted.  “I call myself a good Democrat and vote for the best interest of my people.  I don’t vote for the people of Mississippi or Alabama nor do I vote for those in New York or New Jersey.”  While Bass sounded like a certain candidate, he made it quite clear, “I have no desire just to run for the Senate”, instead he wanted to be sure if he ran, there would be more than adequate financial and popular support for his campaign.  Moving on to Memphis to take the political pulse of the community, Ross Bass again stressed his moderation.  “I am neither liberal nor conservative in the common vernacular,” he said.  Bass certainly sounded like a conservative as he touted a tax cut proposed by President John F. Kennedy’s administration.  Bass, a member of the House Ways and Means Committee, also took the opportunity to obliquely criticize the state tax increases imposed by the Clement administration.  “I am happy we will be able to give sizable tax relief at the national level to ease the burden of increased state taxes in recent months,” Bass told reporters.  The congressman had hurried back to Washington, D.C. to take part in the final deliberations of the Ways and Means Committee on the tax cut bill.

Within a month of Senator Estes Kefauver’s death and weeks after Congressman Ross Bass begin his “listening tour” there were troubling signs for Governor Frank Clement.  Matt Lynch, head of Tennessee’s State Labor Council, said he “guessed” the majority of his membership would favor Bass over Clement.  Lynch denied there had been an significant conversations about the senatorial race, but once labor made its choice inside the Democratic primary, it would support its favorite “energetically and at a grass- roots level.”

As Bass toured Tennessee, so did wealthy businessman M. M. Bullard.  Bullard admitted he did not much care for the notion of running against Ross Bass, saying, “I would like to run against Frank Clement.  I would rather do that than go fishing.”  Bullard told reporters his political philosophy was that of a “conservative liberal.”  Bullard explained he had supported the late Estes Kefauver “abut 95 percent of” the time, but cautioned he was a businessman and while he believed in a progressive tax program, he wished to see a balanced budget.  “I’m not in favor of spending billions and billions to go to the moon,” Bullard said.  The Newport businessman complained he did not like the increased taxes raised under Governor Clement.  He said he would wait to see what Clement did with the extra money raised, a notion that rankled the Kingsport News, who snapped in an editorial, Clement was spending the money “for increased pay for school teachers, to build technical and vocational schools, expand the mental health program, give prison guards more pay and shorter hours, build and improve more roads and all the other things that the LEGISLATURE said the money would go for.”  The Kingsport News sniffed, “However, these are state matters and do not concern U. S. senators.”

With Nancy Kefauver’s definitive statement she would not be a candidate, Congressman Ross Bass quickly put out a statement of his own praising the senator’s widow.  “I believe now with this doubt removed among Sen. Kefauver’s friends that a decision on a candidate may come at an early date,” Bass said.

For a few days the prospective candidacy of Senator Kefauver’s widow, Nancy, caught fire.  Speculation ran rampant Mrs. Kefauver might run for the senatorial nomination until the feisty redhead put a stop to it.

Tennessee Governors & the Path to the US Senate, XV added by design on May 17, 2020
View all posts by design →