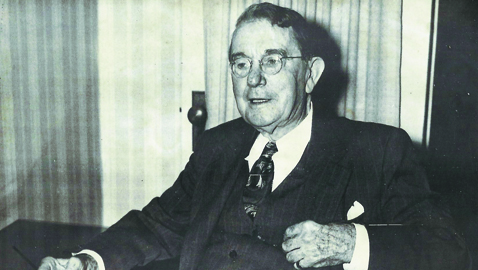 The 1952 Senate race in Tennessee had its roots in the 1948 election, which was a turning point in Volunteer State history.  For decades, Tennessee’s politics had been dominated by Senator Kenneth D. McKellar and E. H. Crump, leader of the Shelby County machine.  The two had parted company only occasionally, usually with disastrous results.

In 1936, McKellar had backed the gubernatorial candidacy of Burgin Dossett while Crump opted to support former Congressman Gordon Browning.  Browning had won easily, but had promptly launched an all out assault on the Shelby County political organization and the Memphis Boss.  In December of 1947, Crump announced he would not support Tennessee’s junior U. S. senator, Tom Stewart, for reelection the following year.  Crump preferred to support an obscure circuit judge from Cookeville, John A. Mitchell instead.  The Memphis Boss had never even met Judge Mitchell and likely expected his announcement would preclude Senator Stewart from running again.  Stewart stubbornly declared he would be a candidate to succeed himself.  The race for the Democratic nomination for the U. S. Senate in Tennessee became a three-way affair with Chattanooga Congressman Estes Kefauver jumping into the race.

On May 23, 1948 Senator McKellar announced he, too, was backing John A. Mitchell for the senatorial nomination.

“I had thought sometime ago I was out of politics and so announced,” McKellar said.  “But conditions in Tennessee have caused me to change my mind.  I leave that open.”

McKellar said Judge Mitchell was a candidate of integrity with a fine war record, having fought in both World Wars.  Senator McKellar noted he and Crump “…have been friends for more than half a century; personal friends, social friends, and political friends.”

Privately, McKellar doubted that Judge Mitchell could win.  Senator McKellar also seemed embarrassed by his failure to back his junior colleague once again.  McKellar had pushed Stewart to run for the U. S. Senate in the 1938 special election following the death of Senator Nathan L. Bachman.  McKellar had strongly supported Stewart once again in 1942, as had Crump.  Yet the Memphis Boss had been appalled when Tom Stewart had quite nearly lost that same year and needed the huge majority he won in Shelby County to eke out a win.  One of Crump’s henchmen, Will Gerber, the Shelby County district attorney, had filled the Memphis Boss’s head with warnings that Senator Stewart was anti-Semitic, which was not true.

McKellar and Crump both strongly supported Governor Jim McCord’s bid for a third term, especially considering that Gordon Browning was making a strong challenge to return to the governor’s office after a decade out of power.  Both Senator McKellar and Crump intensely disliked Browning, who reciprocated their feelings in kind and measure.  McCord had instituted Tennessee’s first sales tax and despite having improved education and provided free textbooks, Tennesseans were unforgiving.  Both McCord and Mitchell lost.  Judge Mitchell ran third in the senatorial race and it became clear that had McKellar and Crump stayed with Tom Stewart, the senator would have been reelected.  It was the most serious political miscalculation of Crump’s long career.

Senator McKellar and the Memphis Boss parted company during the 1948 general election.  Crump, incensed by President Harry Truman’s civil rights plank, defected to support the “Dixiecrats” and Strom Thurmond.  Senator McKellar announced he was supporting President Truman and the entire Democratic ticket.  Truman carried Tennessee handily, winning almost 50% of the vote.  Thurmond carried Shelby County, but won less than 14% of the vote in Tennessee.  Both Gordon Browning and Estes Kefauver triumphed over serious Republican opposition in the general election with ease.

Senator McKellar and Kefauver did not get along well at all.  The two were soon fighting over patronage and most everything else.

Tennessee lost a congressional seat in redistricting in 1950.  As it turned out, that seat belonged to Albert Gore of Carthage.  Gore was considered to be a certain candidate for the U. S. Senate in 1952 when McKellar’s term expired.  But Gore was not alone in coveting McKellar’s Senate seat, as Governor Gordon Browning’s most cherished political ambition was to serve in the United States Senate and it was soon apparent he had not abandoned his desire to return to Washington.  Gore had campaigned hard for both Kefauver and Browning in 1948; in fact, outside of the two candidates, probably no one campaigned harder than did Albert Gore.  In the last three weeks of the campaign, Gore made some forty-odd speeches on behalf of Browning and Kefauver.  Yet Gore’s activity for Estes Kefauver occurred only after the senatorial primary.  Judge John A. Mitchell lived in Gore’s congressional district and the congressman considered him a personal friend.  While Gore campaigned for Gordon Browning in the gubernatorial primary, he made no mention of the senatorial campaign until the general election.

Gore had actually given serious thought to running against Senator Stewart in 1948.  Albert Gore had served in Congress slightly longer than Estes Kefauver and considered the Chattanoogan a personal friend, although he noted in an oral history in 1976 there was certainly an element of “competiveness” in their relationship.  Ultimately, Kefauver announced his candidacy first, which precluded a bid by Gore.

On June 17, 1951, Senator K. D. McKellar made an announcement that he would run for an unprecedented seventh six-year term.

“God willing, I shall be a candidate to succeed myself in the U. S. Senate,” McKellar said.

“My reason for making this early announcement,” McKellar explained, “is because I understand that others are contemplating making the race on the theory that I will not be a candidate and, so there can be no mistake, I make the foregoing announcement.”

“Senator McKellar, a tireless, honest, conscientious worker has done more for Tennessee’s 95 counties, cities and the people individually than any man who ever represented this state,” Crump declared.  “Further, Senator McKellar was one of the creators of TVA.  Every farmer, home owner, manufacturer and businessman is indebted to him for cheaper electricity.

“If those people for whom he has gone out of his way to assist would just ask another to cast his or her vote for the distinguished senator he will undoubtedly roll up a large majority over anyone,” the Memphis Boss said.

McKellar was not only Tennessee’s longest serving member of the U. S. Senate, but one of the longest serving senators in American history at that time.  Senator McKellar had every reason to believe he would be reelected; he had been the most enduring and popular political figure in the state for decades.  Stressing constituent service, there was hardly anyone in Tennessee for whom the senator had not performed a service.  McKellar was also Dean of the Senate, occupying the President Pro Tempore’s post and, most importantly to Tennessee, the chairmanship of the powerful Appropriations Committee.

Senator McKellar was highly sensitive about his advancing years and had removed his birthdate from the Congressional Directory.  The old senator was also ailing and frequently ill, although he kept up a busy schedule.  McKellar had suffered from fainting spells and each severe cold or minor ailment that confined him to Bethesda Naval Hospital was duly noted in Tennessee newspapers.  The McKellar staff did all it could to play down any McKellar illness, no matter how trivial.  It was important to McKellar and his staff to give the impression the senator was both vital and mentally alert.

McKellar’s announcement that he would seek reelection in 1952 did have the effect of giving pause to two potential candidates who wanted to run for the United States Senate very badly.  Gordon Browning soon fell out with Congressman Gore, as the governor believed he had the right of first refusal to run for the Senate.  When it became clear Gore would not step aside for Browning, the governor was miffed.  Browning had given Gore his start in politics, naming him Commissioner of Labor in his first administration in 1937.  Albert Gore had managed Browning’s first statewide campaign, a failed bid for the 1934 senatorial nomination.  Governor Browning believed Albert Gore to be an ingrate, but he was wary of a three-way race for the Democratic nomination.

Congressman James P. “Pat” Sutton had been elected to Congress in 1948 and reelected in 1950.  A genuine war hero who had served with distinction in World War II, Sutton was eager to move up to the Senate.  Sutton was a very conservative Democrat and may have felt he would have the support of veterans and Dixiecrats.  Yet Sutton had to realize many conservative Democrats, especially older voters, would back McKellar through bonds of service, affection and loyalty.  McKellar would also attract votes from those who considered themselves New Deal or Roosevelt Democrats, as the senator had faithfully supported virtually all of FDR’s programs.  There were also those Democrats who believed nobody could do more for Tennessee than Senator McKellar.  Albert Gore would later say that was a powerful argument for the senator’s reelection.

Like Governor Browning, Pat Sutton decided it would be too risky to run against both Senator McKellar and Albert Gore.  He decided to run for reelection, but would launch a well-funded challenge to Senator Estes Kefauver in 1954.  McKellar endorsed Sutton’s candidacy, but the congressman lost the primary badly.

Forty-three years old in 1951, Congressman Albert Gore was photogenic, had an attractive young family, and was clearly in the prime of life.  It was in sharp contrast to the aging and oftentimes ill McKellar.  Senator McKellar was also a bachelor, never having married.  McKellar’s image only served to remind voters of his advancing years and his face all too often showed the ravages of time.

With the elimination of Gore’s congressional district in redistricting, there was little doubt he would run for the United States Senate.  In his memoirs, Gore recounted he had made the decision he intended to move up or out of Congress.

Albert Gore intended to face off against Tennessee’s most formidable vote-getter.