The Knoxville Focus for February 1, 2021 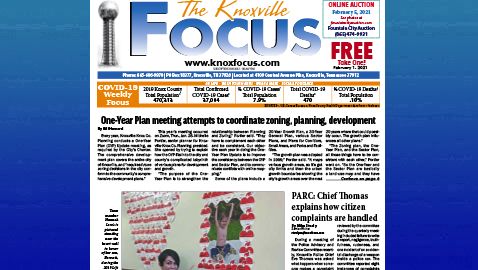 This year’s meeting occurred on Zoom, Thur., Jan. 28. Michelle Portier, senior planner for Knoxville-Knox Co. Planning, presided. She opened by trying to explain how the OYP fits in to the city and county’s complicated labyrinth of various plans for development and growth.

“The purpose of the One-Year Plan is to strengthen the relationship between Planning and Zoning,” Portier said. “They have to complement each other and be consistent. Our objective each year in doing the One-Year Plan Update is to improve the consistency between the OYP and Sector Plan, and to communicate conflicts with online mapping.”

Some of the plans include a 20-Year Growth Plan, a 30-Year General Plan, various Sector Plans, and Plans for Corridors, Small Areas, and Parks and Facilities.

“The growth plan was adopted in 1999,” Portier said. “It maps various growth areas, so it’s got city limits and then the urban growth boundaries showing the city’s growth areas over the next 20 years where that could possibly occur. The growth plan influences all other plans.”

“The Zoning plan, the One-Year Plan, and the Sector Plan, all those things have to be consistent with each other,” Portier went on. “So the One-Year and the Sector Plan are basically a land-use map and they have different land-use classifications. If someone wants to rezone their property and it’s not in the zone that allows it, they need to get a Plan Amendment. These are done by request to the Planning Commission, and then City Council after that.”

“There are 12 different sectors,” said Portier. “Six of those are city sectors, six of them are county. But there are some county sectors that are in city sectors and vice versa. They’re basically the land-use plan for the general plan. It’s just that they’re smaller so they can be updated periodically. The goal is to update these every five to ten years.”

The Knoxville-Knox County Planning Commission and the City Council use the OYP to evaluate individual rezoning requests. According to its website (knoxmpc.org), every parcel of land in Knoxville receives an OYP land-use classification. Each classification contains an acceptable range of zones.

Numerous zoning classifications exist to determine how a particular piece of land may be used. They generally fall under the categories of Commercial, Residential, Agricultural, Industrial, and various Mixed-Use types.

Planning Commission member Sandra Korbelik asked, during the Q-and-A session, whether changes to the One-Year Plan should dictate changes to the Sector Plan.

“The One-Year Plan and Sector Plan are very similar,” said Portier. “The difference is that the Sector plan as the Land-Use Classification has an Appendix in the back; the One-Year Plan has it in the body of the document. The Sector Plans are much broader and cover a much broader swath of land. As far as the Land-Use maps themselves, they’re very similar.”