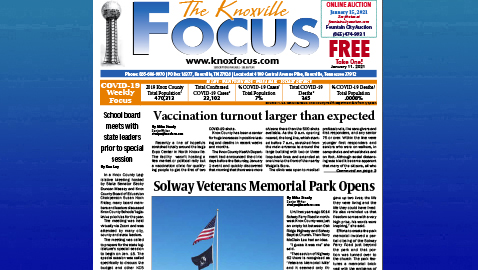 Until two years ago 9014 Solway Ferry Road in northwest Knox County was just an empty lot between Oak Ridge Highway and Solway Baptist Church. Then Reny McClain Lee had an idea.

“That section of Highway 62 there is recognized as ’Veterans Memorial Mile‘ and it seemed only fitting to have a memorial site in that area,” she told The Focus. Lee talked with state Representative Justin Lafferty and, after receiving his support, the process began with scheduling a meeting with TDOT.

“There was a project team established and we could not have asked for a more dedicated, hard-working and committed group of folks. Everyone was hands-on and there for every step of the way,” Lee said.  “Then I talked with Pastor Logan Parton from Solway Baptist Church about the idea and it met with immediate approval from the church leadership.”

Lee said her father was a 22-year Army veteran and as a child she lived on numerous military bases in our nation and in Germany. Several other family members served the nation as well.

“I know the sacrifices the military and their families make and I have the utmost respect for those that serve,” she said. She said the church supplied the land for the site and will maintain it in the future.

Reverend Doctor Pat Polis, president of the Capt. Bill Robinson Chapter of Vietnam Veterans of America, spoke at the quarterly meeting of the TVA Retirees Association a few weeks ago. “He reminded us that those who died in service to their country gave up two lives; the life they were living and the life they could have lived. He also reminded us that freedom comes with a very high price, his words were inspiring,” she said.

Efforts to create the park memorial involved a partial closing of the Solway Ferry Road just beyond the park and that portion was turned over to the church. The park features a memorial brick wall with the emblems of all six military services, a flag pole, benches and a walkway from Solway Ferry Road to the monument, all enhanced with landscaping. A square is reserved on the wall for the Space Force plaque which will be added when its logo is available for public use.

“So many people pitched in to make the Solway Veterans Memorial possible, everyone who participated played such an important role,” Lee said. In addition to the volunteer workers, more than 25 area businesses and individuals provided labor and materials to make the Solway Veterans Memorial a reality.  (Please see A6 for the list of those who helped make the memorial a reality.)

The public is invited to visit the site during daylight hours and the hope is that each visitor will find the site to be a place of respect and honor to all those that served in the armed forces.