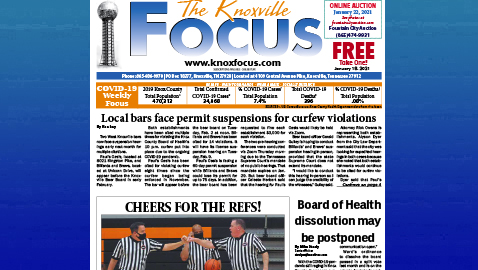 Paul’s Oasis, located at 8021 Kingston Pike, and Billiards and Brews, located at Unicorn Drive, will appear before the Knoxville Beer Board in early February.

Both establishments have been cited multiple times for violating the Knox County Board of Health’s 10 p.m. curfew put into place due to the ongoing COVID-19 pandemic.

Paul’s Oasis is facing a 60-day permit suspension while Billiards and Brews could lose its permit for up to 75 days. In addition, the beer board has been requested to fine each establishment $3,000 for each violation.

The two pre-hearing conferences were conducted via Zoom Thursday morning due to the Tennessee Supreme Court’s mandate of no public hearings. That mandate expires on Jan. 29. But beer board officer Celeste Herbert said that the hearing for Paul’s Oasis would likely be held via Zoom.

Beer board officer Gerald Gulley is hoping to conduct Billiards’ and Brews’ suspension hearing in-person, provided that the state Supreme Court does not extend its mandate.

“I would like to conduct this hearing in-person so I can judge the credibility of the witnesses,” Gulley said.

Attorney Rick Owens is representing both establishments. Alyson Dyer from the City Law Department said that the city was looking for expedited hearings in both cases because she noted that both establishments would continue to be cited for curfew violations.

Dyer said that Paul’s Oasis owner Paul Osterbrink has stated on social media that he will continue to stay open past 10 p.m. That was her reasoning for an expedited hearing in the matter.

“Every day that they stay open past 10 o’clock is a violation of city code,” Dyer said. “Every day we sit here, citations are occurring.”

Owens objected, raising concerns over the proceedings being conducted before the citations were adjudicated in the municipal court system.

“Beer board violations have never been tied to dispositions in other courts,” Herbert said during the pre-trial conference hearing for Paul’s Oasis.

Billiards and Brews was cited for a violation on Dec. 27 when police responded to a fatal shooting after 2 a.m.

And while the beer board doesn’t directly become involved in criminal proceedings, Dyer said that the number of violations is a concern.

“We know that somebody has been shot,” she said. “We don’t care who was shot.

“There is not another business in Knoxville right now that has as many citations as your client and has had a murder on the premises,” Dyer said while addressing Owens during the hearing.