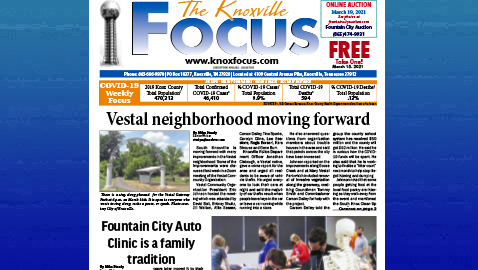 South Knoxville is moving forward with many improvements in the Vestal neighborhood. Some of the improvements were discussed last week in a Zoom meeting of the Vestal Community Organization.

Knoxville Police Department Officer Jonathan Clabough, a Vestal native, gave a crime report for the area and urged all residents to be aware of vehicle thefts. He urged everyone to lock their cars at night and said the majority of car thefts result when people leave keys in the car or leave a car running while running into a store.

He also answered questions from organization members about trouble houses in the area and said that patrols across the city have been increased.

Johnson reported on the improvements along Goose Creek and at Mary Vestal Park which included removal of invasive vegetation along the greenway, crediting Councilman Tommy Smith and Commissioner Carson Dailey for help with the project.

Carson Dailey told the group the county school system has received $50 million and the county will get $92 million. He said he is curious how the COVID-19 funds will be spent. He also said that he is working to finalize a “litter court” next month to help stop illegal littering and dumping.

Johnson noted that some people getting food at the local food pantry are littering as they walk away from the event and mentioned the South Knox Clean Up scheduled for April.

Kara Strouse said she is working with the Boys and Girls Club to replace a fence and is trying to get a vacant lot used by the community at the club to be cleaned up, sold or donated. She said the lot is littered with abandoned syringe needles and broken glass and is overgrown. She suggested the lot and the club playground be monitored by the organization and neighborhood.

Johnson applauded a Maker’s Market held recently at the Sustainable Future Center, saying it was very successful with many people staying to chat with the vendors.

Britney Shultz and David Bolt talked about the market, held the first Saturday of each month, and also mentioned the Sustainable Fabric Market where people learn to reuse and repurpose fabric.

Johnson reported on a cleanup effort at the Vestal United Methodist Church Cemetery and also announced a sing-along scheduled for the Vestal Gateway Park at 6 p.m. on March 16. He said it is open to everyone who wants to sing along, recite a poem, or speak. He said signs will be put up beforehand to promote the event..