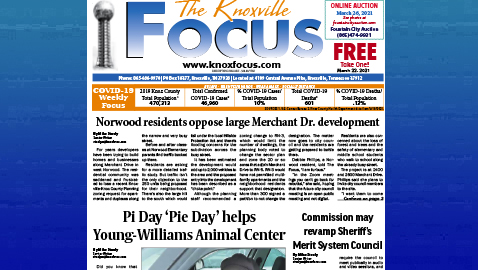 For years developers have been trying to build homes and businesses along Merchant Drive in west Norwood. The residential community was saddened and frustrated to lose a recent Knoxville-Knox County Planning zoning request for apartments and duplexes along the narrow and very busy street.

Before and after classes at Norwood Elementary parents find traffic backed up there.

Residents are asking for a more detailed traffic study. But traffic isn’t the only objection to the 250 units being proposed for their neighborhood. There’s also the large hill to the south which would fall under the local Hillside Protection Act and there’s flooding concerns for the subdivision across the busy street.

Although the planning staff recommended a zoning change to RN-3, which would limit the number of dwellings, the planning body voted to change the sector plan and zone the 20 or so acres that adjoin Merchant Drive to RN-5. RN-3 would have not permitted multi-family apartments and the neighborhood residents support that designation. More than 300 signed a petition to not change the designation. The matter now goes to city council and the residents are getting prepared to battle there.

Debbie Phillips, a Norwood resident, told The Focus, “I am furious.”

“In the Zoom meetings you can’t go back for rebuttal,” she said, hoping that the future city council meeting is an open public meeting and not digital.

Residents are also concerned about the loss of forest and trees and the safety of elementary and middle school students who walk to school along the already busy street.

The project is at 2400 and 2600 Merchant Drive. Phillips said she plans to invite city council members to the site.

“I want them to come down and look at this,” she said.

Apparently Hilton Capital Group purchased the property under the name Merchant Tower Tennessee LLC. Formerly the large property was owned by the Girl Scouts of Tanasi Council Inc. Developer Dan Lello is being represented in his effort by Benjamin C. Mullins.

Resident Connie Holland addressed the developer and said, “You build it, you sell it, and you’re out of here.” She said the development proposal is “safety versus profit.”

“The developer indicated at one of our meetings with him and his attorney that he wasn’t willing to spend the money for plans, engineers, etc. until it was rezoned,” Phillips said.

With the property adjoining Merchant Drive to be developed, the hilly back portion might remain wooded with trees and possibly, along with Legacy Parks, become a local park.

Norwood residents are pledging to oppose the planning recommendation when it goes to city council and Phillips is inviting city council and local school board members to come out to the site and learn of potential problems if the zoning and development is approved.