By design on September 9, 2012Comments Off on Tony Norman selected as new Commission Chair 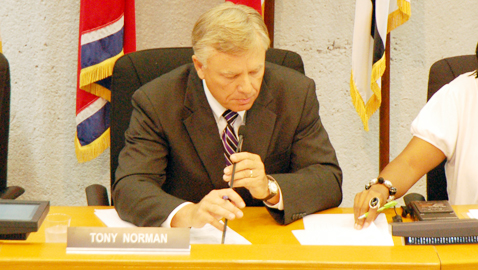 After two years as Vice Chairman of the Knox County Commission, Brad Anders was poised to assume the full Chairmanship following Mike Hammond’s decision to step down.

Anders had every reason to believe the transition would be a smooth one; he had the open or tacit support of the school system, the Chamber of Commerce crowd, and The Knoxville News-Sentinel. Add support from the Knox County Sheriff’s Department and much of the local Republican establishment and it was a potent mix.

Yet, Anders’ bid to become Chairman got derailed somewhere along the way.

Commissioner Tony Norman, widely acknowledged to be one of the most thoughtful members of the County Commission, did less to garner votes than anyone can remember, a sharp contrast to Brad Anders’ relentless bid to win. Norman, an ardent advocate of the hilltop-ridgetop legislation, is openly viewed with suspicion by many Republicans as being too moderate. A retired teacher, Norman has been a vocal critic of the school system, which accounts for the bulk of the county’s budget. Norman has also pointedly questioned the Chamber of Commerce’s use of tax dollars.

In the end, perhaps it was Norman’s ability to reach out to others that helped him to come from behind and win the Chairmanship of the Knox County Commission. Norman won the votes of the two Democrats on the Commission, Sam McKenzie and Amy Broyles, as well as Jeff Ownby, Dave Wright and Larry Smith. Norman’s coalition was comprised of arguably the Commission’s most conservative and liberal members. That coalition spanned the political spectrum with Norman right in the middle.

Commissioners Richard Briggs and Mike Brown voted for Anders, as did Commissioners-At-Large Ed Shouse and Mike Hammond. Briggs seemingly was on every side, having promised his vote to both Norman and Anders. In the end, Briggs, who is planning a campaign to unseat State Senator Stacey Campfield, sided with the “business” Republicans, which should come in handy to raise money for a state legislative race.

Anders was clearly surprised by his loss, if not embittered. South Knoxville Commissioner Mike Brown tried to recoup by nominating Anders to remain as Vice Chairman of the County Commission, but Anders lost by an even larger margin to Seventh District Commissioner Larry Smith, a humiliating loss for one who had envisioned himself as a future Knox County Mayor.

Norman sounded a conciliatory tone upon assuming the Chairmanship, saying he realized he had been passionate about some issues and he would try and temper his passion in the future.

Tony Norman’s election was something of a surprise and it certainly was an absolute  shock in some quarters.