By design on September 9, 2012Comments Off on Trainor In Trouble In South Knox 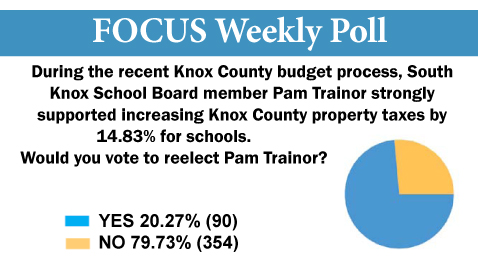 Pam Trainor, South Knoxville’s member of the Knox County Board of Education appears to be in trouble as she approaches her reelection bid in 2014. Our survey this week asked South Knoxville residents, “During the recent Knox County budget process, South Knox School Board member Pam Trainor strongly supported increasing Knox County property taxes by 14.83% for schools. Would you vote to reelect Pam Trainor?”

The answer all across the district was a resounding “no.”

Trainor enthusiastically supported the budget proposed by Superintendent James McIntyre which sought more than $35 million new tax dollars. Every member of the Board of Education supported the proposed budget save for Mike McMillan, East Knox County’s member of the Board. The Knox County Commission did not fund the increase, but gave the schools an additional $7 million in one-time funding.

The schools also recently announced almost $14 million in additional funding from a budget surplus. Superintendent McIntyre proposed spending all of the money save for $146,000 on renovations and projects at Pond Gap Elementary, Shannondale Elementary and Farragut. At the last Board of Education meeting, Trainor chided colleague Mike McMillan who was seeking to get a new gymnasium for Carter Middle School. Trainor said that McMillan would frequently lean over to point out there was nothing for South Knoxville in particular expenditures. Trainor declared Board members needed to look at the greater good all across the county. As the Board voted to spend virtually $14 million in one night, there was nothing for South Knoxville in the funds allocated.

Trainor In Trouble In South Knox added by design on September 9, 2012
View all posts by design →