By design on March 6, 2016Comments Off on Trolley service cut back for Summit Towers 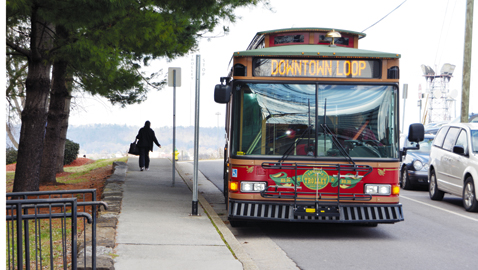 The Knoxville Transit Authority is looking to start implementing changes to its trolley services this May. One of the proposed changes, dealing with service to Summit Towers, saw debate for much of KTA’s February meeting.

Although the trolley route will add Saturday service and continue to serve Summit Hill Drive every 10 minutes, the door-to-door service to the 13-story apartment building, located about a block away at 201 Locust Street, will be cut back to once an hour. About 300 people, many mentally or physically disabled, live at the Towers and depend on the current trolley service.

Transit Commissioner Hubert Smith said that new public comments should be taken before a decision is made about the changes of service to Summit Towers.  Attorney John Lawhorn said that public comments were taken in the previous months but added new comments would do no harm. The KTA voted to allow comments and citizen Lincoln Lincoln spoke.

Lincoln said that 53% of the residents there are minorities and that most residents are elderly and disabled. He said he had contacted the state Department of Transportation, which in turn contacted KTA, and said the board was “not doing the right thing for Summit Towers.”

Lincoln said the new policy would provide trolley service “only 48 times a week.”

Smith said the cut backs to the Towers’ service isn’t “a compromise” because current service offers 140 stops there per week. He was the only one to vote against the trolley route proposal which included the Summit Towers Apartments reduction in service.

“A compromise is a give-and-take. What KAT offed was no compromise. To propose to take away something completely and then give a bone, is no compromise,” Smith said.

“It’s important that our elderly and disabled have access to public transportation the same as everybody else. Only in America do we discount the quality of life for our elderly and disabled. During the daytime you can’t throw a rock and hit anybody in the Old City where service will now be offered at the expense of Summit Towers residents, but we know there are many (at Summit) that rely solely on this service to connect with the outside world,” he said.

Dawn Distler, Director of Transit, told The Focus that the new hourly schedule to Summit Towers will run from 9 a.m. until 4 p.m. Monday through Saturdays and, just down the hill on Summit Hill, will run at 6 a.m. until 8 pm. Monday through Thursday and until 10 p.m. on Fridays and Saturdays.

She also said funding is being sought for a paved pathway from the towers to Summit Hill Drive, with benches along the walk and that a shelter is planned there at the crosswalk.

The process for changing the routes began last August with informative news releases and signage targeting riders as well as listening sessions seeking public input held as “Trolleys on Tap” and an online survey.

More than 500 responses were received on the survey and more than 40 people attended the Trolleys on Tap group discussions. The meeting last week began with Dawn Distler, Director of Transit, answering a question from Smith and stating that the changes will take place probably in May.

“I was impressed by the number of people who spoke out and got involved,” Distler said of the various comments received about trolley service around town.

Councilman Dan Brown asked what will happen if it is found that the routes are not working and Distler said the routes are reviewed but any changes for routes would have to go through the process again.

“This city is growing and developing rapidly and the transit system needs to grow and change,” she said.

Trolley service cut back for Summit Towers added by design on March 6, 2016
View all posts by design →