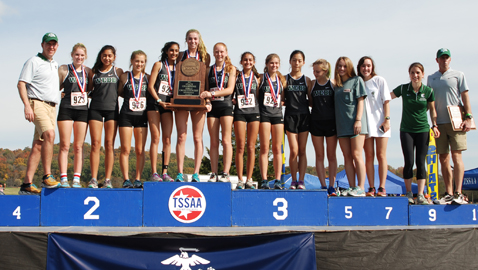 A journey that started in June was completed with a state record sixth consecutive TSSAA cross country championship on Nov. 4 for the Webb School girls’ team.

All five Lady Spartans also reached their goal of finishing in the Top 15 individually and earning all-state honors.

Juniors Niki Narayani and Lindsay Holliday led the way by placing second and third in the Division II-A event held at the Percy Warner Park Steeplechase Course in Nashville.

Rebecca Story of Christian Academy of Knoxville won the race in 18:11.16 to end her prep cross country career with a second straight state crown.

“Our girls’ team showed great dedication by running twice a week starting at 6 a.m. and averaging about 45 miles a week,” said Bobby Holcombe, who is in his fourth season as head coach at Webb.

Holcombe said Narayani and Holliday “stepped up big” by getting into the Top 5 this season.

Webb senior Carter Coughlin won the boys’ race with a time of 15:47.10 for his third state title in a row and moved into a four-way tie for most state individual cross country championships in TSSAA history.

Coughlin and Story now have their sights set on the Foot Locker South Region meet, which will be held Thanksgiving weekend in Charlotte.

Catholic’s Jake Renfree placed fourth and Devin Sullivan eighth in the Large Schools division as the Irishmen came in second behind Siegel.