By design on August 19, 2018Comments Off on Two affordable housing zonings approved on first reading by council 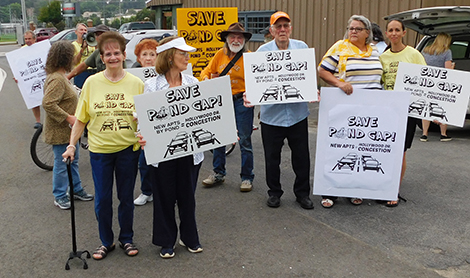 Two affordable housing projects were before the Knoxville City Council Tuesday, both getting unanimous first reading approval but not without some neighbors objecting.

Elmington CG LLC is proposing low income housing on East Young High Pike in South Knoxville and on Hollywood Road in the Pond Gap Community. Both requests ask that existing commercial zones be changed to RP-2 (Planned Community). Councilwoman Stephanie Welch told her fellow members that affordable housing is welcome there and that the “South Woodlawn Neighborhood supports that request.”

Local resident Keith McBride had several questions about the Young High Pike development but said he was not opposed to it. He asked about ingress and egress, questioned if the apartments would be “Section 42” and asked if KCDC or Elmington would manage them when built. Thirty units per acre were approved by the planning commission for that development.

David Williams, president of the Pond Gap group, said after the meeting that they are requesting the city to put some “traffic calming” strips along the busy two-lane road. Williams asked the city council “not to take our neighborhood away” and noted the racial diversity of the West Knoxville neighborhood.

Stacy Varon, who lives on Hollywood, said neighbors there were an example of the working class and said she was concerned about the blind hill there, safety and security, and the impact on Pond Gap Elementary.

Amy Midis of the Forest Heights Neighborhood Association said they were concerned over the level of density and said the proposal for apartments there is not “compatible with the one-story World War II cottages” along the route. She asked the council to send it back to MPC and to use RP1 instead of RP2, which she said would work better.

Mary Yates, who lives on top of the hill along the route, said she was concerned about an increase in traffic and the noise such a development might produce. She and two other local residents said the empty site should be a park and not developed.

Councilman Andrew Roberto moved to approve the Hollywood Drive zoning request but only after asking several questions and asking the MPC if the council could make some recommendations on the matter. The second and final vote will probably come when the council meets on the 28th and the neighborhood opponents have vowed to continue opposing the rezoning.

“We understand the concerns,” John Sheppard of Elmington LLC told the council and the audience. He promised to preserve the pond there possibly with a historic marker, improve flooding, not to increase traffic and add and improve sidewalks there.

Two affordable housing zonings approved on first reading by council added by design on August 19, 2018
View all posts by design →